Sooshi Mango Off the Boat Tour 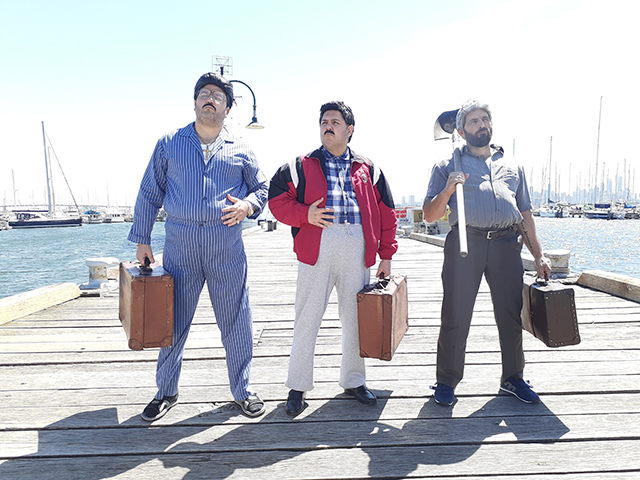 THEY'RE BACK! Comedy superstars Sooshi Mango have today announced that they will return to stages across the country this August and September for a special round of encore performances.

The much-loved comedy troupe, made up of Joe Salanitri, Carlo Salanitri, and Andrew Manfre, are about to wrap up their wildly successful OFF THE BOAT TOUR, which grew from an initial seven shows to a staggering 38 dates.

"I mean thousands and thousands of people turned up to see us… what a rush! The spirit of comedy and laughter is still very much alive despite all the recent hardships… and to top it all off at 44 years of age I can finally afford to move out of my parents' house." – Andrew

Due to massive demand, they have now added a series of encore shows in Brisbane, Sydney, Wollongong, Melbourne, Adelaide, and Perth, as well as new shows in Gippsland and Ballarat.

In an impressive feat, they have broken the house record at Melbourne's Rod Laver Arena to be the only comedy act to perform more than two shows of the same tour in the last 20 years " a very special achievement in their hometown.

"It's still all very surreal! Selling out arena shows, and all the accolades are nothing compared to hearing thousands of people laugh, especially after what we've been through. Now we have another two months on the road again to bring laughter to all that missed out. Even though I miss out on Salami season!  I can't wait to do it all over again!" – Joe

"I'm so overwhelmed by how much people are enjoying this show! We put a lot of work into it to make it an experience the fans would never forget, and it feels great that it's being received that way. Finally, I made my Italian mother proud after all those years of disappointing her!" – Carlo

Sooshi Mango's popularity continues to soar, with their relatable and timely humour earning Joe, Carlo and Andrew a permanent place in the social feeds of Australians in every corner of the country.

In 2021, Sooshi Mango launched the Saucy Meatballs Podcast, which has seen them interview everyone from UFC champ Alexander Volkanovski to Prime Minister Scott Morrison. The podcast is available to listen now exclusively on Spotify.

The trio's rise in Australian comedy has been nothing short of meteoric, with their viral online videos amassing hundreds of millions of views. Their characters " most notably ethnic mums and dads " have made their way from video skits in their parents' garages to television screens across the country and stages around the world.

Sooshi Mango's humour transcends cultures and borders, and their content is wildly popular with people of all backgrounds. Proud Italian-Australians, their comedy is inspired by their parents and the older generation, and they are happy to be able to shine a light on their heritage.

Don't miss your chance to experience one of Australia's funniest and most-loved comedy acts live on stage.