Lions and tigers and dummies, oh my!

Fresh from a busy year touring Australia and a critically acclaimed season at the world's largest performing arts festival in Edinburgh, Dummies Corp's all-female circus comedy show, Don't Mess with the Dummies, will premiere at Adelaide Fringe from 14 February – 13 March.

The Dummies are on an expedition and they're inviting everyone along for a raucous ride of non-stop slapstick and skill. Pack your bag, tie your shoes and get ready for circus-filled hilarity as the Dummies monkey around the jungle, swing through treetops and skip past foliage. With a rockin' soundtrack, unbelievable acrobatics and their trademark frivolity…it's time to rumble!

The multi-award winning Dummies Corp is Australia's only dedicated family circus company. They have always been relied upon to delight local and global audiences with a crowd-wowing mash-up of circus, comedy and imaginative play.

The trio of fiercely funny women includes Ellen Henry, Shona Conacher and new member Sarah McDougall. All three are overly excited to share this brand-new production with Adelaidean young and their grown-ups. 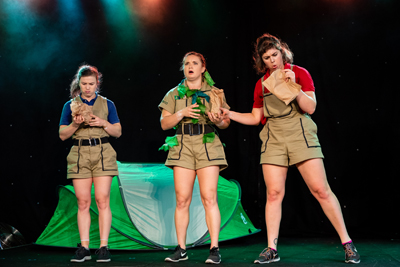 "I have performed with many a circus troupe, but there is something about Don't Mess with the Dummies that captures the heart – it's pure silliness, pure play and pure acro-fun! All of the things that I love best," says Sarah, who performed with the troupe at Melbourne Fringe in September and has toured nationally and internationally with companies such as Circolombia, Circus Oz and Casus.

Part of the genius of the Dummies shows is that they don't forget about the big kids.

"We appreciate that parents and grown-ups like to be entertained too, so like a Pixar film, the show includes cultural references that resonate across generations. At the forefront of the show is the timeless and universal sense of fun and imaginative play – appealing to the young and the young at heart." says director and Dummies Corp founder Jamie Bretman.

As silly as they are strong, these Dummies are masters of circus who laugh in the face of gravity and tickle your funny bone to take you on a wild ride of organised chaos!

Don't miss your chance to set up camp and stampede into the jungle for an outlandish adventure with the latest Dummies extravaganza during Adelaide Fringe.

Question: How would you describe Don't Mess with the Dummies?

Shona Conacher: Don't Mess With the Dummies is a crazy, high energy jungle adventure with three lovable friends. We're as strong as we are silly with an amazing mix of circus skills and shenanigans in an incredible show for the whole family. 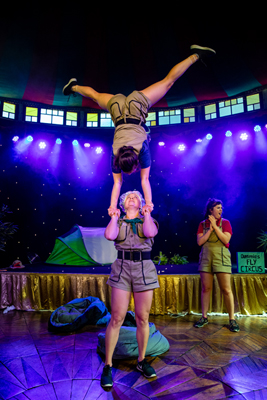 Question: What inspired the creation of Don't Mess with the Dummies?

Shona Conacher: We wanted to make a show that was highly engaging for children and adults alike that really showcased how strong and funny women could be. Often funny and highly skilled show, particularly circus shows are performed by men or groups of men. We really wanted to showcase to children, particularly girls that they could be hilarious, silly and strong too.


Question: What could audiences expect from a Don't Mess with the Dummies show?

Shona Conacher: An audience who comes to see Don't Mess With the Dummies can expect to walk away energized, giggling and impressed. Circus skills we perform during the show include acrobatics, trapeze, hula hoops, juggling and more; it's absolutely packed to the brim with things to make you go "ohhh and ahhhh".


Question: Where do you find inspiration when creating Don't Mess with the Dummies shows?

Shona Conacher: We were pretty inspired by the other two shows from our Company, Trash Test Dummies, and Splash Test Dummies. Both are stupid fun, award-winning shows full of great gags and skills. We wanted our show to fit into the company vision and style as well as having a refreshing zing of an all-female cast and new skills. We also tried to take inspiration from all the strong, funny women we know, love and work with.


Question: How important was it for you, to star in an all-female show?

Shona Conacher: In an industry like circus, it's very common to find shows that are male-dominated casting and aesthetic wise. When I was younger I was very exposed to strong female role models that encouraged me to pursue my dreams performance and lifestyle-wise. It's very important to myself and the other cast members that we make a fun, engaging show to show girls (and boys) that they could grow up to be funny and strong and that they shouldn't be limited by their gender. It's also amazing to get to work with other women who have the most incredible work ethics and circus skills.


Question: What was it like performing at the arts festival in Edinburgh?

Shona Conacher: Performing at Edinburgh Fringe was so much fun; as a festival it's on such a bigger scale than everything, I've ever experienced before. Between doing our show, seeing as many other shows as we could and trying to catch up with all our amazing friends who were also performing at the festival we were exhausted! We tried to remember it's a marathon, not a race (the festival goes for the whole month) and try and have some downtime, away from the festival every day. We spent a lot of time working but also a lot of time laughing and getting to explore an amazing city.


Question: What's next for Don't Mess with the Dummies?

Shona Conacher: Our next stop is Adelaide Fringe. You can catch us on Wednesday through to Sunday for the whole festival (14th of February to 15th of March) in The Garden of Unearthly Delights in the Corona. We're so pumped to be doing the show for the whole month and letting Adelaide see what we've got!