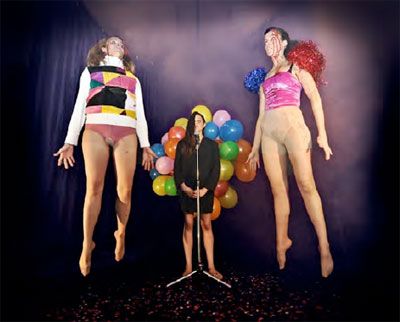 From Britney Spears to Barack Obama, performance trio post reveal how politics and entertainment aren't that far apart in a world of smoke and mirrors.

Shamelessly Glitzy Work looks at lies and illusion,manipulation and the sheer power that comes with working acrowd. The performance delves into the construction of imagein the political arena, magicians and illusion, rave culture, mass euphoria, and professional 'pick up artists' who claim theycan seduce any woman using an intricate set of rules, codes and strategic costume choices.

Levitating bodies and wet t-shirt competitions, bleeding heads and spectacular light shows are delivered with the intenseenergy and confidence of a performance group that has no shame in peeling back the layers of glamour to reveal all theugly truths you might not have known.

There are stories half told and facts contested; solos interrupted and smoke and mirrors that fail to hide anything. Thereis a little bit of honesty (but not much).

post are gaining a reputation as one of Australia's most interesting contemporary performance groups with their previouswork Gifted and Talented winning awards from both Melbourne and Adelaide Fringe Festivals and performances atBrisbane Festival's Under The Radar program.

Artists: Mish Grigor, Natalie Rose and Zoe Coombs Marrpost is supported by the Australian Government through the Australia Council, its arts funding and advisory body.

Shamelessly Glitzy Work was developed in the CultureLAB.

"post is best described as a trio of anti glamourperformance artists who love to dance. Badly.... Ohyeah." Sydney Morning Herald