While many believe that getting older inherently means getting weaker, new research has revealed it's far from all doom and gloom when it comes to ageing, with one in five baby boomers reaching peak fitness levels once they hit the big 5-0.

According to the research, commissioned by Ostelin to mark National Vitamin D Awareness Day 2016 (June 21), it's actually the younger generation that needs to exercise more caution, with almost a quarter (23%) of those aged 18 to 40 doing little to no exercise at all.

In stark comparison, fifty-plus Australians are smashing ageing stereotypes with over half (58%) working out at least four times a week and close to one in four (24%) claiming to exercise more than ever before. In fact, almost a third said they felt stronger and more energised now than when they were younger.

However, it's unlikely you'll find this new -Generation Strong' on the treadmill or in the pool – rather they're getting fit in more unconventional ways such as playing with their grandkids, pumping iron at the gym or participating in team sports.

Aimed at raising awareness of the important link between exercise, Vitamin D and bone health, the experts behind National Vitamin D Awareness Day 2016 are calling for all Australians to follow the lead of their older counterparts and take proactive measures to safeguard their bone strength.

Sport and performance psychologist, Jacqui Louder, said that while older Australians were setting an excellent example by prioritising their bone health, the issue did not just impact the elderly.

'Healthy bones are the pillar of overall strength and fitness for all age groups, so while it's great to see older Australians embracing this mentality and being proactive, it's equally important that the younger generation act now in order to safeguard their bones and overall health," she said.

Louder added that it was worrying that many younger Australians, particularly those in their prime, were choosing to forgo exercise given so many work in sedentary office jobs, meaning they spend most of their days tied to the desk.

'Many are unaware that we reach peak bone mass around the age of 20 to 30. It is therefore vital that all Australians consider the health of their bones from a much younger age, to prevent future conditions such as Osteoporosis.

"Bone health is instrumental to overall health, so it's incredibly important that the younger generation overcome the mental barriers to exercise – and getting up, getting out and getting active on National Vitamin D Awareness Day is a great place to start."

'Although ongoing education around the importance of Vitamin D and bone health seems to be working, there is still a need to combat the younger generation's laissez-faire attitude towards exercise," he said.

'Coupled with this, getting outdoors for approximately 7-30 minutes at midday each day during winter will help to maintain your Vitamin D levels which is also critical for bone health. Where this is not achievable, eating Vitamin D rich foods such as fatty fish (sardines, herring, mackerel, tuna and salmon), fortified milk, margarines and dairy blend spreads are recommended."

To tackle the issue and help change behaviours, experts are calling on Australians to Get Up, Get Out and Get Strong on Monday 20 June, 2016 for National Vitamin D Awareness Day. If you're concerned about your vitamin D levels, ask your GP or pharmacist to recommend the best tool for you. 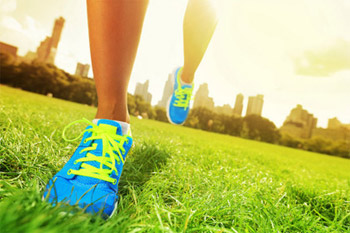 Question: How are exercise, Vitamin D and bone health all linked?

Professor Robin Daly: Bones like stress and will respond favourably to regular weight-bearing exercise and muscle strengthening activities. However, the benefits of exercise on bone health may be blunted if vitamin D and calcium are insufficient. Maintaining adequate vitamin D levels is crucial as it plays a key role in promoting calcium absorption in the intestines. Since calcium is not made in the body, it must be absorbed from the foods we eat and this requires vitamin D. Without sufficient vitamin D, calcium absorption can be reduced which can lead to a reduction in bone density and an increased risk of osteoporosis.


Question: Why do you believe fifty-plus Australians are becoming stronger?

Professor Robin Daly: I think a growing number of Australian over the age of 50 are becoming more aware of the health benefits of exercise, and the need to remain active and strong so that they can continue to live independently and free of disease, and participate in a range of the activities without limitations. People are now living longer, but to maintain muscle function, independence and prevent disease and disability, it is important they remain strong and healthy, especially since muscle mass and strength starts to decline from around the age of 45 to 50 years.


Question: What lesson should younger Australians take from -Generation Strong'?

Professor Robin Daly: Younger Australians must consider their health and well-being from a young age. Years of inactivity can markedly increase the risk of chronic disease in later life, including osteoporosis. We know that peak bone mass is achieved around the age of 20-30 years, and that a 10% increase in peak bone mass could delay the development of osteoporosis by up to 13 years.


Question: Why is it so important to exercise throughout, our whole life?

Professor Robin Daly: Exercise is the only modifiable lifestyle strategies that can have a positive influence on almost all bodily systems, including physical and mental health. There is no other single intervention that can produce such profound and widespread health and well-being benefits. Maintaining an active lifestyle throughout life can prevent or reduce the risk of almost all common chronic diseases, and ensure that people maintain their function, independence and quality of life into old age.


Question: What types of exercise should -Generation Strong' be participating in and how often?

Professor Robin Daly: For bone and muscle health, regular weight bearing exercise such brisk or hill walking, jogging and stair climbing combined with muscle strengthening activities such as resistance (strength) training are recommended for -Generation Strong'. It is recommend that they set aside at least 30 minutes on most days of the week to engage in regular weight-bearing physical activity (this can be divided into shorter 10 minute bouts of activity), include at least two sessions of resistance training each week to optimise muscle strength and prevent muscle loss, and avoid prolonged periods of sitting. However, it is also important to note that any activity is better than doing nothing, but more will result in greater benefits.


Question: How does not exercise affect our bones?

Professor Robin Daly: The structure and strength of our bones are largely determined by the loads which are placed on them. When bones are unloaded, which occurs during prolonged bed rest or spaceflight, there is typically a dramatic and rapid loss in bone density. Interestingly, there is now emerging evidence that repeated exposure to prolonged sitting (sedentary behaviour) can also have a deleterious effect on bone density. Since muscles are responsible for locomotion (and thus are needed to move bones), it is important to keep them strong and functioning to ensure our bones are constantly loaded.


Question: And, how important is sun exposure to healthy and strong bones?

Professor Robin Daly: Vitamin D forms in the skin when it is exposed to UV from sunlight. Since very few foods naturally contain vitamin D and few foods in Australia are fortified with vitamin D, it is important that you spend some time outdoors with exposed skin to support vitamin D production. The amount of sun exposure required to produce adequate levels of vitamin D is relatively low. While this will vary based on season, location, area of skin exposed and skin type, for most people 6-7 minutes mid-morning or mid-afternoon during summer is all that is needed. Longer periods are needed during winter. Given the important role of vitamin D in promoting calcium absorption, a lack of sun exposure could ultimately lead to a reduction in bone density and thus increase the risk of osteoporosis. Vitamin D also contributes to muscle strength and function. Low vitamin D levels have been associated with impaired balance, poor stability and decreased walking speed, and an increased risk of falling and fracture.


Question: What message would you like to promote this National Vitamin D Awareness Day?

Professor Robin Daly: It is never too late to start becoming physically active to achieve health benefits, but it is important to maintain an active lifestyle throughout life to prevent common chronic diseases such as osteoporosis. Combining regular exercise with adequate nutrition and safe sun exposure for vitamin D is an important step to optimise bone and muscle health and function as we get older.

New research indicates Aussie women are overworked and under-sunned, at the detriment to our health. In fact,...