Peter Helliar It's A Date Interview Peter Helliar It's A Date Interview

Question: For those who haven't seen the show, how would you describe, It's A Date?

Peter Helliar: It's A Date is a comedy series which explores the world of dating; it's funny and can be awkward and painful to watch. We've tried to give the full concept of dating and you can't do a full series about dating and have it all fun and happy as there are dates that go well and dates that go badly with awkward moments whilst some dates end well and some don't end well. It's A Date includes surprising twists, along the way, which is why you're never quite sure which dates will work out and which ones won't.


Question: What inspired the concept behind It's A Date?

Peter Helliar: I love The Office both the UK and US versions and I loved the reliability of it and how universal it is so I wanted to touch on subjects that are also universal and I thought about the idea of connecting with people and searching for a partner which connects to the world of dating which seemed like a perfect playground of comedy and one that could be done reasonably cheaply as most of it is two people, sitting down, talking.


Question: I can imagine it's been a while since you've been on date; did you previous dating experience inspire any of the episodes?

Peter Helliar: Yes! There were quite a few and throughout the whole series there are lots of little moments that were inspired by my own experiences. The two that are directly from my own life are during my date with Lisa McCune we end up in a strip club and that happened more so as an experience for me as there was a group of us guys with our girlfriends and the girls said 'wouldn't it be fun to go to a stripclub" (laughing) and the guys said 'oh, sure!" That all happened…

Another time, I invited my 17 year old girlfriend to my house and I cooked dinner; I served a really bad stir-fry and Streets Vienetta Icecream for dessert with my family basically in the next room and that is conveyed in one of the episodes. My brother also farted on the phone when I was trying to call a girl which also happens in one of the episodes, as well (laughing)!


Question: How did you go about working with a writing team?

I got a great team together and we wrote one episode, each week. We got the actors in before we started writing the scripts to speak to them about where we wanted it to go and where they would like to go and any ideas they had. The process was very collaborative and an organic experience.


Question: What was the highlight, for you, of writing and filming It's A Date?

Peter Helliar: There were quite a few highlights for me; I think the scripts that I directed were highlights for me; I worked with Denise Scott and John Wood with an episode and the nursing home episode which features two 80 year olds discussing whether they should have sex on a first date (laughs). The nursing home episode was a tricky episode as I was writing with Lawrence Mooney and it wasn't familiar territory as I'm 38 and we had to think about big issues. There is another episode with Kate Richie, Nadine Garner and Nazeem Hussain which is about opposites attracting; Kate Richie and Nadine Garner are lesbians and they go to Nazeem Hussain's Sri Lankan Muslim home. I'm not a lesbian and I'm not Sri Lankan Muslim which may come as a shock to you… (laughs) but it was great to write that episode with Kate Langbroek because we had to think outside our own minds and fences to put the hard yards in and get the characters right whilst also making it fun and funny without being patronising.


Question: And what was the worst? The strip-club or the vomit scene?

Peter Helliar: As the creator and writer of a series it is a bold move to write a strip-club in for yourself (laughing). It was a brave choice for me and I've heard people speaking about intimate filming but I've never had to kiss anyone or have an intimate scene on stage or camera and I hope I don't have to because even that short little scene in the strip-club was shot in four minutes but it was really awkward. The actress was lovely and great but I can now relate when actors talk about awkward scenes, even though that was only a small one.

Lisa McCune vomited on me, in two takes! If you watch it back and you can now, on DVD, you can see her almost look like she's crying in my lap, but she's actually laughing. Lisa McCune is such a professional and she used it to enhance her performance. The first take she neatly vomited into my lap but on the second it was a real projectile spray to the face!


Question: In each episode the show becomes even more witty with genuinely unexpected storylines; was it easier to write the episodes the further you got, or more difficult to think of new dating scenarios and issues?

Peter Helliar: Each episode was written separately and we didn't write them in order; the way you see them on TV and on DVD, we didn't necessarily write them in that order. One of the great things about the series is that we could place the episodes wherever we wanted them to be placed. We knew the first and last episodes and we used the episodes with twists and fantasy sequences at the end because we didn't want people to expect that every week. It was really great, I was excited to sit down with a writer. Sometimes I'd say 'we've done that, in another episode" whether that be a topic or joke and it did get a little bit more challenging in regards to that; although we had different actors and a different question for each episode which gives you the ability to find inspiration in other places.


Question: How did you go about getting an amazing cast including Gold Logie award-winners (Asher Keddie, Kate Ritchie, John Wood and Lisa McCune) to feature in the show?

Peter Helliar: It was pretty easy (laughing)! There were many actors who I'd met over the years and had become friends with such as Shane Jacobson, Asher Keddie, Stephen Curry, Ross Noble who I could ring up and ask. Then once you get a few actors it almost snowballs and people want to be involved because others are involved. I've been in comedy for 17 years and people feel okay about me (laughs) and they were happy to help out as well as working with a great production company.

I think the actors like to work and they like to work on good material and they saw the potential in the idea. It was a short commitment too, as we shot two days in each state. All up, it was a three day commitment with a half day table read.


Question: Now, the important question: How important is honesty on a first date?

Peter Helliar: That's a question we address in episode two and it's a good one because you need to be honest about the big things but there is no harm in keeping some things, for date two or three (laughs). If you've had a sex change operation that might be one to bring up on the first date before things get hot and heavy, later on (laughs). I think generally honesty is good as a rule but don't blurt everything out in the first 20 minutes of the date. That's probably a bit Dr Phil (laughing). 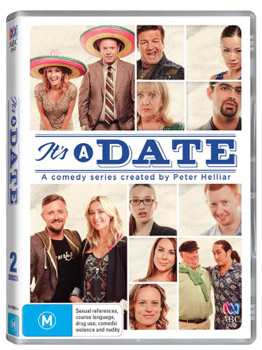 It's A Date DVD

It's A Date is a comedy series exploring the trials and tribulations of the world of dating.

It's A Date explores the tension, expectation and complication of finding true love. Each episode thematically links two self-contained dates as they bravely head toward desire or disaster.

Each new episode features a different cast tackling a different set of situations and addressing a new question each week. Should you have sex on a first date? Does age matter? How accurate are first impressions? How important is honesty on a first date? These are just some of the questions and issues addressed in series one of It's A Date.