PLONK is back for another vintage.

Starring The Chaser's Chris Taylor, Joshua Tyler and Nathan Earl, PLONK Season Two takes another comedic look behind the scenes of the making of a serious wine program.

The brainchild of Nathan Earl, PLONK Season Two is a One Stone Pictures production made in association with ITV Studios Australia and supported by Screen Australia, the South Australian Tourism Commission, South Australian Film Corporation and Wine Selectors.

All six half-hour episodes of PLONK Season Two will premiere at once on streaming service Stan in June, with Season One already available.

All episodes of PLONK Season One and Two will be available to stream on Stan in up to full HD, on multiple devices including TVs, smartphones, tablets and computers.

Follow the continuing adventures of PLONK'S hapless TV crew as they bumble, fumble and embarrass their way around Australia's most iconic wine regions, leaving a path of destruction in their wake. Never has the gentile world of wine been so poorly treated as PLONK manage to insult, infuriate and desecrate all who come into contact with them.

Welcome to the world of PLONK.

What should we expect from Season Two of PLONK?

Nathan Earl: Chaos, Mayhem, Grenache. It's team Plonk contractually thrown together again trying desperately to make their serious wine show. We hit the Riesling Trail, met some Barons of The Barossa and assault Australia's first Master of Wine. It's bigger and brasher this year but still has its heart in the right place.


What's the best part about filming for PLONK?

Nathan Earl:The Wine, the food, the people, the locations. And did I mention the wine.


More importantly; what's the most difficult part about filming for PLONK?

Nathan Earl:It's the blending of reality and fiction. Plonk's essentially a documentary and a narrative comedy show mashed together and as a result comes with all the problems and stresses of both. The series is written and rewritten on the fly, often on the set as we're shooting, so trying to stay ahead of the game is a challenge. We like the fact that the show reacts organically to the people we meet and the places we find along the way, but turning those moments into an episode of TV in a 24hr period takes a bit of work.


Why did you decide to set this season in South Australia?

Nathan Earl:All the wine regions in SA have a truly unique sense of place. The Clare Valley has such a different vibe to McLaren Vale or The Adelaide Hills. Each has gorgeous scenery, incredible wines but most importantly a fantastic and eclectic cast of characters who were willing and happy to play along with our show.


What did you learn from Maggie Beer?

Nathan Earl:You can put salted caramel spread on anything and it tastes amazing.


What are your top recommendations on impressing guys by choosing wine on a first date?

Nathan Earl:The best tip I have is just to be willing to try new varietals of wine. Order something neither of you have tasted before. It's fun. (Also steer clear of Sav Blanc. Guys hate that stuff.) 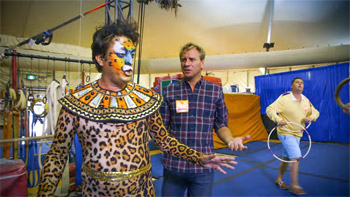 He has both Produced, Directed and written for many successful television programs including The Chaser's War on Everything, Review With Myles Barlow, The 7:30 Report, Lawrence Leung's Choose Your Own Adventure, Adam Hills in Gordon Street Tonight, The New Inventors, Balls of Steel, Wanted, The Checkout and was Senior Director on the Andrew Denton produced Hungry Beast.

In 2011 Nathan served as Showrunner, Writer & Director on the award winning 21 part web series The Great Crusade, which took out Gold and Bronze Lion honours at the Cannes Lions Awards.

He served as Creator, Showrunner, Writer and Director on the comedy series PLONK.

Georgie Lewin - Series Producer
Georgie's Producing credits include the ABC's Gruen Transfer and its spin offs, the Walkley Award winning Hungry Beast, Channel Ten's Can of Worms, and Enough Rope with Andrew Denton. Georgie has also served in producer and talent producer roles across a range of TV genres including the science documentary series Tales of the Unexpected for SBS TV. Georgie recently served as a Development Producer at ITV Studios Australia.

Georgie is currently Series Producer of the comedy series PLONK.

Chris Taylor - Performer
Chris Taylor is a writer and performer who's best known as a member of The Chaser team, responsible for television programs such as The Chaser's War on Everything, CNNNN and The Hamster Wheel on ABC-TV. He worked as a journalist for 5 years before joining The Chaser newspaper as its senior writer. For two years, Chris co-hosted the popular drive time radio show Today Today on Triple J, and in 2007 he wrote the hit musical comedy Dead Caesar for the Sydney Theatre Company. In 2010 he returned to Triple J with Andrew Hansen to write and perform The Blow Parade comedy series, which won the 2010 ARIA Award for Best Comedy Release. He was also the script editor on the second seasons of Review with Myles Barlow and Hungry Beast, and recently appeared as himself in the comedy series PLONK.

Joshua Tyler - Writer, Performer
Joshua Tyler is a writer, actor and dramaturge. Most recently, Joshua starred in and co- wrote the comedy series PLONK. Other recent screenwriting credits include Tashi (a children's animated series for ABC) and Wake With Me (an original feature film currently in development at Goalpost Pictures) plus a script editor stint at Southern Star. His short films have screened at a number of major local and international film festivals and sold to TV in various regions worldwide. Joshua's theatre credits include work for Belvoir St Theatre (The Kiss), Tanja Liedtke (Twelfth Floor, Construct), Force Majeure (Not in a million years), Australian Dance Theatre (Ignition), Sydney Dance Company (New Breed), State Theatre Company of SA (Equus), (Madame: the story of Joseph Farrugia). Joshua hosted The Process Podcast, an artist interview series for iTunes. His interactive instillation -Elevator one' was exhibited at the Museum of Contemporary Art's Artbar (curated by Michaela Gleave).

Nick McDougall – Writer, Editor
Nick began his career as a writer, producer and editor on the ABC show Hungry Beast, and has gone on to work on everything from internet skit comedy, to half hour documentaries, to feature drama. Some of his credits include The Chaser's Yes We Canberra, Gaycrashers, Legally Brown, The Great Australian Bake Off and Vive Cool City.

He was nominated for Young Australian Journalist of the year by the Walkley Foundation, awarded best director by the Newcastle Shootout, won best film at the Open Road film Festival, and once took the prize for best dancer at a pub in Gosford. He currently serves as a writer/producer for the SBS news and documentary program The Feed, and a writer/editor for the comedy series PLONK.

Aaron Smith – Director Of Photography
Aaron is a cinematographer and director specialising in digital, film and cgi workflows across fictional, commercial, documentary and interactive productions. A cinematography Masters graduate of the Australian Film Television & Radio School, and with over 10 years of industry experience, he has collaborated with a diverse range of respected, innovative and awarded producers, shooting throughout Australia and across the world.

With an inquisitive mind, an eye for the unexpected and a sensitive approach to storytelling, Aaron has collaborated as director of photography on a range of narrative projects including comedy series PLONK and the video game L.A. Noire. He directed the hybrid series Hungry Beast, the controversial documentary series Dumb, Drunk and Racist, and the investigative and adventurous documentary series Head First. He was cinematographer on the long-form documentary productions Country Town Rescue, What's The Catch? and Stop Laughing...This Is Serious. Versatile in styles and genres, Aaron has also directed series for The Chaser including Yes We Canberra, The Hamster Wheel and The Checkout. He has shot projects recognised with ACS Awards and a Walkley Award and collaborated on productions nominated for AFI, AACTA, Logie and ATOM awards.