New research released for World Sleep Day suggests Australia's record-hot summer stole the sleep of more than a quarter of the nation, with 29 per cent of survey respondents reporting extreme weather as a major sleep disruptor.

The study, commissioned by Nature's Own, suggests that beyond the heat and storms, the subsequent thirst that comes with extreme weather had more than half (58 per cent) of the nation being woken up by needing to use the loo. General concerns about climate change also kept 10 per cent of the population awake at night.

While the wild weather is impacting the sleep of Australians, wider concerns about family and work, as well as bad screen habits are also contributing to the nation's sleeplessness.

The data also revealed that work stresses also contribute to the sleeplessness of the nation, with 19 per cent being kept awake by issues at work, and 14 per cent by worries about job security.

While reasons for sleepless nights vary, the issue is affecting Australians across the nation. According to a recent Ipsos survey, over 12 million sleepless nights are endured across the nation every week. The report also found 43 per cent of Australians have sleep issues at least once a month, while 19 per cent face trouble with sleep 2-3 times a week. This means 10.9 million Australians struggle getting a good night's sleep every month and 4.8 million struggle several nights a week.

Alarmingly, the survey also found that a staggering 48 per cent of Australians with sleep issues did nothing to remedy the situation, instead just waited for it to pass.

The research also exposed Australia's binge-watching habits are harming our health, with 15 per cent choosing to stay up late to watch TV rather than go to sleep at a decent hour, risking not getting sufficient sleep during the night.

Our love of social media is also keeping us up, with younger Australians (18-24 years) the most likely to swap bedtime stories for Instagram stories, with a quarter (24 per cent) staying up late on social media, compared with just 3 per cent of older Australians (55+ years).

According to Nature's Own, there are simple changes people can make to their daily routine to help them fall asleep and stay asleep. These include:

Having a sleep routine: go to bed and get up at the same time each day
Create a relaxing environment with minimal technology and a comfortable temperature
Start unwinding before bed by having a warm drink, taking a relaxing bath, using lavender oil and avoiding use of technology
Avoid overloading your system with a heavy meal before bedtime
Limit your use of stimulants and caffeine intake to the mornings

However, there is a reluctance amongst Australians to seek treatment. A recent study commissioned by Nature's Own found that less than 13 per cent of people suffering from sleep issues try medication and less than 5 per cent try vitamins to manage poor sleep. The respondents in the study cited concerns about drowsiness and potential side effects as key reasons for not seeking treatment.

For more information, tips and advice, visit the webpage of the #1 Sleep Brand in Australia (Dietary Supplements), Nature's Own, www.naturesown.com.au. 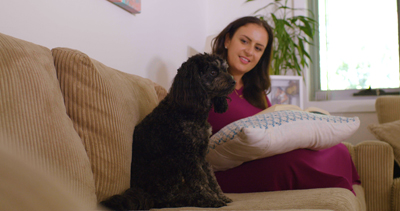 Question: Can you talk us through your usual sleep troubles?

Natalie Kessell: My sleep on average is pretty poor. I've had sleep issues for most of my life, rarely sleeping through the night. On average, I wake up around five times a night and it could be any number of things that wake me up, from outside noise to vivid dreams, or my "to do" list running through my head! When I do wake, it takes me a while to get back to sleep, so I always have my e-reader nearby with a trusty lighthearted novel to hopefully lull me back into sleep.


Question: What originally made you determined to seek a successful treatment for your sleep difficulties?

Natalie Kessell: The major side effect that I experience from lack of sleep would be constant lack of energy as well as a general feeling of malaise. I feel that my life could improve exponentially if I had better sleep, so I'm eternally on the search for helpful solutions. Apart from being more productive and getting more done throughout the day, I also think I'd be in way better shape…and who doesn't want that?


Question: Do you believe the summer weather contributes to your lack of sleep?

Natalie Kessell: When the weather is too warm, it can definitely further impact my ability to get to sleep. The heat can also be another factor that wakes me up throughout the night and keeps me up, so I'm grateful to have air-conditioning at home now!


Question: What day rituals have you begun incorporating into your routine to aid better sleep?

Natalie Kessell: I've tried a number of things to help combat my sleep issues, including the use of holistic methods such as using crystals, flower essences and aromatherapy to induce a better night's sleep. I also take natural supplements to help manage my energy levels throughout the day. Currently, I'm trying to improve my sleep by having a bedtime routine which includes a calming shower (I like to also take this time to express things I'm grateful for), meditating and try to "switch off" my mind by watching a lighthearted comedy with my hubby before bed.


Question: As a business owner, do you find it difficult to switch off screens close to bedtime?

Natalie Kessell: As a business owner who works from home, my "office hours" are far from traditional. When I'm not working, I'm still generally thinking about my business to some degree, especially during busy periods. Whilst it can be difficult to switch off the phone and computer screens close to bedtime, I always do so, knowing it will be easier for me to get to sleep. I have also become a fan of the "do-not-disturb" function on my phone overnight - it's been my saviour!

Natalie Kessell: I'm a big fan of both morning and nighttime routines. I usually wake up at around 6am, meditate, schedule my day and take my dog for a walk. I do a bit of reading, brush up on some education around my business and check my social networks before "starting" work at 10am. Generally, given my erratic sleeping patterns I do fade in the early afternoon, so I try to get a bit of a nap in at around 2pm and then work again from 3pm to 7pm. Then it's time to Netflix and chill with my hubbie and dog before I commence my bedtime routine at around 9:30pm.