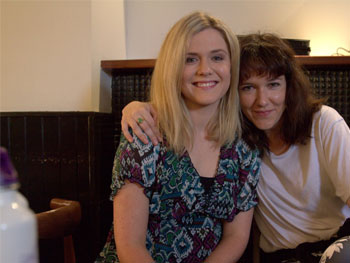 A Comedy That Explores The True Meaning Of Going Viral

A brand new comedy series set in a sexual health clinic is putting the sexy back into sexual health. Sexy Herpes is a hilarious six-part dramedy exploring the lives of sexual health workers and their dysfunctional patients, available to watch exclusively online now at www.youtube.com/sexyherpes

Funded by Screen Australia and produced by Mad Dan Productions and Beyondedge, Sexy Herpes is the brain child of co-creators Madeleine Dyer & Daniel Mulvihill and stars Genevieve Morris (Comedy Inc, No Activity), Zoe McDonald (Open Slather), Jay K. Cagatay (The Slots Comedy), Chloe NG (Neighbours), Rohan Nichol (Star Wars, Fools Gold) and Harriet Dyer (Love Child, No Activity). Dyer and Mulvihill were inspired to create the show after growing tired of seeing content that didn't represent their friends, family and the world they lived in. 'We wanted to normalise sexual and gender identity" says Mulvihill, 'as well as tell stories from characters with different cultural backgrounds that weren't cliched - all in the name of comedy."

Sexy Herpes focuses on the daily plight of sexual health nurse Sarah (Zoe McDonald) and her eclectic band of workmates. Sarah is permanently having a bad day, her patients are hypochondriacs and horse-f*ckers; her boss Barb (Genevieve Morris) always -overshares' (her TMI radar is apparently broken), her colleague Jackie (Chloe NG) is a shy, single nurse terrified of actual physical contact and then there's gender-fluid receptionist Karl/Karen (Jay K. Cagatay) who has his/her own relationship struggles to deal with. This motley crew of misfits may still be working out how the hell life, sex and relationships really work, but at least they all have each other.

"Sexy Herpes encapsulates the things I love most about Aussie humour" says executive producer Charlie Carman, 'it's utterly irreverent and self-mocking, but filled with heart. That's the Aussie formula for comedy gold, and thanks to talented creators Madeleine Dyer and Dan Mulvihill, Sexy Herpes delivers on it in spades." Carman finishes. Genevieve Morris, who plays boss and matriarch Barb agrees, 'I was thrilled to work with Madeleine and Dan on Sexy Herpes and had so much fun playing Barb. Full blown binge viewing is highly recommended, I really do hope it's catching!"

Dyer and Mulvihill made a point of consulting with experts in the field of gender identity and sexual health throughout the development of Sexy Herpes to ensure they reflected the truth of those communities as accurately as possible. 'Sexual health seems to be one of the final frontiers in terms of broader awareness and constructive conversation in our society" says Dyer, 'there also appears to be a deep sense of urgency with leading sexual health bodies to make education and proactivity regarding sexual health a main priority with younger audiences. We really hope Sexy Herpes can catch on and go viral (pun totally intended) and spread the word about sexual health!'"

Question: How would you describe Sexy Herpes?

Madeleine Dyer: I think it's a very funny, very hearty show. It's cheeky, unapologetic and perhaps a little alienating - just how I like my comedies! It's an entertaining look into sexual health, a subject many have trouble talking about. It speaks to broader issues and themes around sexual and gender identity and inclusivity in society, as a whole. By normalising 'weird,' it becomes wonderful! Well, I hope! Question: Why did you decide to get on board for Sexy Herpes?

Madeleine Dyer: I had no choice - my crazy brain cooked it up with Dan Mulvihill's crazy brain. Once they get going together - it's unstoppable! After talking with a sexual health nurse friend of ours, it was such an interesting premise for this show. She talked about how she had problems with intimacy and meeting people, wondering if her job as a sexual health nurse was getting the better of her! Using this great springboard, we wanted to make a heartfelt and transgressive comedy - something we found few and far between, on our journey as content viewers. We felt compelled to make some serious social and political statements in our work, through the guise of comedy. There's no better place than online to challenge the boundaries either and inspire debate and discussion!


Question: What do you hope viewers take from Sexy Herpes?

Madeleine Dyer: A couple of deep belly laughs? Perhaps I'm asking too much? Also, a new lease on sexual health! Hopefully they feel they can open the dialogue around sexual health and broader discussions around sexuality. We want people to feel comfortable about themselves that little bit more, for watching the show. Perhaps people may even feel a little less alone because these characters, as diverse as they may seem, are just as normal as anyone - and some of them probably have herpes and that's okay! On a serious community announcement note, sexual health organisations are facing some serious challenges with Australian youth, with many STIs making a resurgence, so now is the time for people to speak up and take charge of their own sexual health. It's something we all have to do.


Question: Did you have to do any research into sexual health, prior to beginning filming?

Madeleine Dyer: Hell yes! Firstly, Dan Mulvihill and I both went to get a sexual health test. I think we both said we were worried we had chlamydia, so we got the whole 'pee in the jar' experience. They have little drop off bins now for those filled up jars too, so it's super discreet and you don't have to clumsily return your jar full of warm pee to the nurse! If we were to test positive, we'd get a call in the next week. That was when Dan Mulvihill and I (having been together for ten years) looked at each other hoping we don't get the call because that would be super awkward. We didn't get the call...

We had numerous sexual health consultants that viewed the script at various stages of development. With their feedback and with our previous research, we were able to be accurate and truthful in our depictions of characters and their situations. Along the way, we heard some outrageous stories and patient cases and it really did prove that the truth is stranger than fiction....and funnier! We also had a gender consultant on board to shape our gender-fluid character of Karen/Karl. In such a time when awareness and acceptance around gender diversity is so important, there was due diligence to make sure this character was truthful and authentic. Of course, everybody's experience of themselves is purely subjective, but we wanted to treat this character with utmost respect.


Question: How do you hope Sexy Herpes lifts the taboo of sexual health?

Madeleine Dyer: To hear that even the title of this show is off putting to people speaks to a rampant conservatism in this country that is currently hurting a lot of people across the board, particularly regarding the political debate around SSM currently. If you don't talk about something, firstly it can eat you up inside. It has power over you. By taking responsibility for your sexual health (and anything else in your life that's difficult to talk about) by reaching out and talking about it, I think we can all reach a new place of liberation around these issues and I think people will be able to be their best selves.

Question: What was the best thing about being on set for Sexy Herpes?

Madeleine Dyer: For me, it was my solo directorial debut. After working with Dan as co-director on many of our projects prior to this, I had understandably that typical worry that I may not do a good enough job alone, without my mate. I luckily got to feel an immense power in taking charge of this role and figuring out my own process and the way I work with my actors and crew. I really did have one of the best times of my life and it's given me incredible confidence moving forward as a comedy director. In a time when women need to step up and take opportunities in the film industry, I feel very happy to be coming into my own. Seeing Dan (Dan Mulvihill) also rise to the challenge as head producer, running such a smooth ship and taking care of the whole set was also a really heartening moment for me. The whole cast and crew were absolutely the best people to work with and they were so supportive of us - we really were lucky to have every single person. Oh and Duy and Andy, our EPs, did the catering for the shoot and it was next level! An army marches on it's stomachs!


Question: Can you share the most challenging part of filming Sexy Herpes?

Madeleine Dyer: I think shooting 70 minutes of content in 8 days was definitely the hardest part! That's a mammoth effort because this show was a total beast! Of course, due to such a small budget, this was why we had to work so fast. You really hope as an indie filmmaker that you don't compromise quality too much and that everyone working with you is getting the time and resources they need to do their job well, so it's a delicate balancing act. Again, we had such a legendary cast and crew who just smashed it out and, thankfully, we could all still have a laugh together at the wrap party.