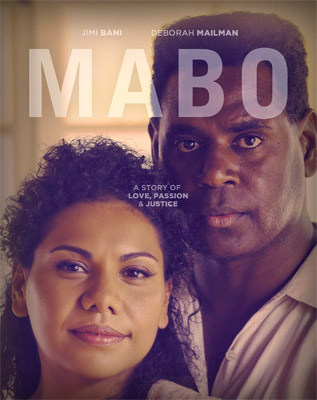 Introduction: In 1973 Eddie -Koiki' Mabo was shocked to discover that the ownership of the land his ancestors had passed down on Murray Island in the Torres Strait Islands for over 16 generations, was not legally recognised as theirs.

Rather than accept this injustice, he began an epic fight for Australian law to recognise traditional land rights. Eddie never lived to see his land returned to him, but the name Mabo is known in every household throughout the country.

In January 1992, at only 55, Eddie died of cancer. Five months later the High Court overturned the notion of terra nullius. Underscoring this epic battle is Eddie's relationship with his wife Bonita. Mabo is as much a love story as a document of one man's fight to retain what he believed was legally his.

Mabo traces Eddie's life - from a carefree young man of 17, through his courtship and marriage to his one true love, up to his death and the handing down of the High Court decision on that historic day - 3rd June 1992.

Synopsis: This television drama tells the story of one of Australia's national heroes: Eddie -Koiki' Mabo, the Torres Strait Islander who left school at 15, yet spearheaded the High Court challenge that once and for all overthrew the fiction of terra nullius.

It traces Koiki's life story, through his early exile from his beloved Murray Island, his years of working on the trochus trawlers and the outback railways – a blackfella in a whitefella world - to his eventual decision to embrace activism. It tells of his struggles to begin a school specifically for Aboriginal and Islander children, and then of the acute pain of rejection by the gatekeepers of his own homeland, Murray Island. Considered a -troublemaker' by the white authorities, Koiki finds that when he applies to return to Murray to visit his dying father, the Murray Island Council – four times – denies him entry. Koiki's mistake, it seems, is choosing to be a black activist under the racist, repressive -police state' of Joh Bjelke Petersen's Queensland. But Koiki will not be cowed. When he learns, to his horror, that the land on Murray he believes he owns is legally gazetted as Crown Land, Koiki resolves to fight. This propels him into a ten-year, life or death struggle against three mighty foes: the Queensland Government, premised on the old guard Bjelke Petersen racist principles; the Commonwealth Government, and the opposition and fear and conservatism of the authorities on Murray Island itself. It is a David and Goliath tale. Koiki, his fellow plaintiffs, their supporters and their legal team have shockingly few financial resources. The all-powerful Queensland Government uses every tactic in its arsenal to defeat them. And year after year the struggle goes on, Koiki feeding his family on yams from the garden and fish from the river, giving his money, his strength, his health and, ultimately, his life to this titanic battle.

Hand in hand with this story of heroism, is the tender love story of Koiki and Bonita, the woman he met as a teenager, and loved through 30 years and the raising of ten children. It tells of the deep love and partnership that fuelled their unflagging fight to change the face of Australia forever.

About the Production
Marking the twentieth anniversary of the historic High Court decision, Mabo is the story of one of Australia's national heroes: Eddie -Koiki' Mabo - the Torres Strait Islander who, despite leaving school at 15, spearheaded the High Court challenge that once and for all overthrew the fiction of terra nullius.

Mabo is also the tender love story of Eddie and Bonita - the woman he met as a teenager, and loved over three decades and the raising of ten children. It tells of the deep love and partnership that fuelled their unflagging fight to change the face of Australia forever.

Written by Sue Smith (Bastard Boys, RAN, Brides of Christ), and directed by Rachel Perkins (Bran Nue Dae, First Australians, One Night The Moon), the film traces Eddie's life, through his early exile from his beloved Murray Island, to his years of working on the trochus trawlers and the outback railways as a blackfella in a whitefella world - to his eventual decision to embrace activism. In research, writer Sue Smith spent extended periods of time with Eddie's family, and specifically Bonita - hearing the many stories of what went on at home and behind the scenes of Eddie's epic fight.

With her recollections and many tales, Bonita's contribution, as well as the support of the entire Mabo family, has made the telling of this powerful story not only very true, but extraordinarily real. Both Eddie's eldest daughter Gail Mabo and Charles Passi, the son of Eddie's friend and co-complainant Dave Passi, came on board as cultural consultants - assisting the production with knowledge and guidance as well as sourcing many of the extras, singers, dancers and actual personal items to dress the Mabo home.

The project attracted the who's who of the Australian acting fraternity – all wanting to participate in what many believe is one of Australia's greatest stories. As a result Mabo features an outstanding ensemble cast including Jimi Bani (The Straits, RAN) as Eddie -Koiki' Mabo, Deborah Mailman (Offspring, Rush, The Secret Life of Us) as his wife Bonita, alongside Colin Friels (The Eye of the Storm, Bastard Boys), Miranda Otto (The Lord Of The Rings: The Return Of The King, Cashmere Mafia, South Solitary), Rob Carlton (Paper Giants: The Birth of Cleo, Underbelly: The Golden Mile, Chandon Pictures), Ewen Leslie (Love My Way, Kokoda) Leon Ford (The Pacific, Beneath Hill 60), and Tom Budge (Bran Nue Dae, The Pacific, East of Everything).

Many of the locations used in the film were the actual places where the action occurred - with scenes shot at the Black Community School Eddie and Bonita established in Townsville; in the gardens of James Cook University where Eddie worked as a gardener; in the actual lecture theatre where he gave his first lecture; and most notably in the exact Brisbane courtroom where the original legal battle took place. To ensure authenticity, production designer Felicity Abbott drew upon the family's recollections for the design of the Mabo family home in Hibiscus Street, with original Eddie Mabo paintings adorning the walls, and actual family photos and paraphernalia dressing the set.