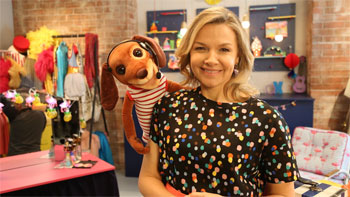 Justine Clarke's Ta Da! invites preschool children into the -behind the scenes' world of a theatre where Justine and her Stage Manager friend, Dash the dog, are making the final preparations to her performance before she heads onstage. Together, they have melodies to master, dance moves to fine tune, sets to dress, and a costume box full of fun to be had before the final call - and then Ta Da! the show begins.

This is a show about putting onshow! An energetic, humorous journey through imaginative play and drama where preschool children get to experience the craft of theatre and music production from the dressing room. They will learn about singing, improvisation, acting, set building, costume design and dancing.

During the 15 x 7 mins series, Justine and Dash are accompanied by an exciting ensemble of special guest performers and artists, who all work together to get everything ready just in time for the live show. Special guests include, musician Tim Rogers, actress Denise Scott, dancer and TV personality Paul Mercurio, hip hop artist and triple j host Hau Latukefu, actor and physical comedian David Collins, plus many more.

Each episode concludes with Justine performing the song of the day, which will be filmed in front of a live audience. These original songs have been co-written by Justine Clarke, Peter Dasent, Arthur Baysting, Josh Pyke, Sean Peter, Jane Lindsay, Cameron Bruce, Bruce Griffiths and Tim Rogers, and cover a variety of genres including rock, country, hip hop, classical, folk and more.