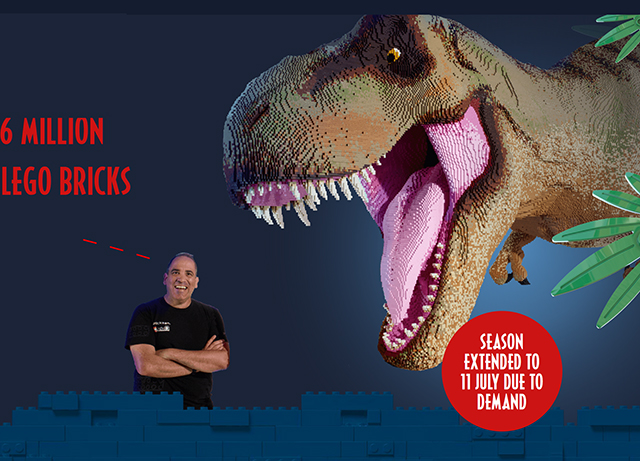 JURASSIC WORLD BY BRICKMAN EXTENDED DUE TO POPULAR DEMAND

The hit, world-first adventure at Melbourne Convention and Exhibition Centre continues to wow visitors Due to overwhelming popular demand, Jurassic World by Brickman® has extended its exhibition dates at Melbourne Convention and Exhibition Centre (MCEC) until Sunday 11 July 2021. Thousands of fanatical fans have poured through the doors since the April opening of the stunning exhibition, which sold out through the Victorian school holidays.

The epic adventure has been a hit with kids, parents and grandparents alike who have been awed by the largest LEGO® brick exhibition in Australian history, made from over 6 million LEGO® bricks. Visitors have discovered more than 50 large-scale dinosaurs, props, scenes and activities inspired by the blockbusters Jurassic World franchise, including an enormous T.rex – a favourite of many explorers.

Jurassic World by Brickman® is brought to Melbourne thanks to TEG Live and Brickman®, in partnership with MCEC, and led by LEGO® Certified Professional Ryan McNaught. Ryan is the only LEGO® Certified Professional in the Southern Hemisphere and the star judge of the hit TV show LEGO® Masters Australia. Season 3 of LEGO® Masters Australia has premiered to rave reviews, putting an even greater spotlight on Ryan and his incredible LEGO® building creativity.

Ryan shared his thoughts on the success and thanked Victorians for embracing the exhibition. "Seeing the overwhelming support and turn-out by Victorians has been so rewarding. I am so proud and excited to see the experience extended, and I'm appreciative of every single person who has already visited," said McNaught. "The whole team has worked on this for the last two years, its so great that finally people have been able to enjoy our hard work and so happy that people have enjoyed it so much. I'm totally loving all the models that people have built and contributed to the exhibtiion." continued McNaught.

Visitors to Jurassic World by Brickman® begin by walking through the iconic 4-metre-tall Jurassic World gates to experience the island itself, then the inner workings of the Jurassic World lab, where dinosaurs are genetically engineered. Explorers then venture to the baby dinosaur enclosure, where a life size LEGO® brick Brachiosaurus awaits that weighs well over 2 tons! Adventurers learn how to track dinosaurs across the island before encountering escaped Velociraptors Blue and Delta, and the infamous T.rex.

In the Jurassic World by Brickman® experience, LEGO® fanatics also show off their own building skills. The hands on exhibition has a myriad of activities, from island building, LEGO® paleontology and discovery through mystery mosaics, hybrid dinosaur creation, learning to track a dinosaur by creating species footprints, and even building escape vehicles to get away from the T.rex. With 2.5 million bricks to play with, creativity is not in short supply! Geoff Jones, CEO of TEG, said Jurassic World was shaping up to be the Brickman's biggest adventure yet.
"We are thrilled to see how Melbourne has fallen in love with this incredible, immersive exhibition and we are delighted that we are able to extend Jurassic World by Brickman® into July so more families can come and enjoy it, and fans can return for more adventures," said Jones.

Peter King, Chief Executive of Melbourne Convention and Exhibition Centre, said MCEC is thrilled to be extending the partnership with TEG Live and Brickman to keep the exhibition in Melbourne. "This is such a unique event which has helped bring life to MCEC, with families and friends enjoying time together and the exhibition. It's a great sign for the recovery of not only our business but for Melbourne, that we can extend the partnership and continue to provide the perfect space for Jurassic World by Brickman®," said King. Tickets are selling fast and on sale at the door, and through Ticketek. Book your weekend tickets now to avoid disappointment. The safety of patrons and staff is top priority, and Jurassic World by Brickman® will continue to operate with a commitment to a COVID safe environment including capped visitor numbers, physical distancing measures and sanitiser stations onsite.

Jurassic World by Brickman® is supported by the City of Melbourne, the Victorian Government and the RISE Fund.

TICKETS ON SALE at www.ticketek.com.au

It is strongly recommended to pre-book to secure a preferred session time. The safety of patrons and staff is top priority, and Jurassic World by Brickman® will continue to operate with a commitment to a COVID safe environment including capped visitor numbers, physical distancing measures and sanitiser stations onsite.