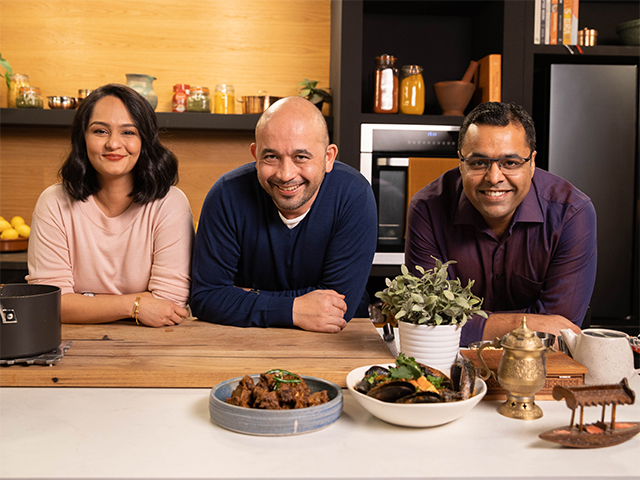 Three celebrated Indian-Australian chefs Helly Raichura, Adam D'Sylva and Sandeep Pandit will join the SBS Food family this September as they debut their enticing new food documentary series, India Unplated. From the far north to the southern tip and all the regions in-between, the 10-part series will highlight the complexity and diversity of Indian food from right across the subcontinent.

The series follows the hosts as they explore the rich, aromatic flavours of India, each host bringing with them a fresh take on Indian cuisine, their own individual connections to India and a shared love for the vibrant flavours of the country. From masterful use of spices, to regional cooking techniques, and references to India's vast and complex culinary history, India Unplated will celebrate the diversity of the subcontinent's ancient cuisines.

Helly Raichura said: "To keep our culture and heritage alive, sharing it with Australia, and passing it down to the coming generations through food means a lot to me. Indian cuisine enjoys rich history, very important food philosophies and varied hyper regional food. In this series I am cooking dishes my mum and grandma cooked for my family as well as bringing you dishes that I have learnt along the way."

Adam D'Sylva said: "Growing up in a mixed Indian-Italian family means I had the best of both worlds and it reflects in my style of cooking. Whilst my earliest memory of cooking is watching my nonna make gnocchi, I am delighted to be a part of India Unplated where I get to show my experiences from the other half of my family from India. The recipes that I will be presenting in this series are my take on Indian cuisine - Indian food with a modern twist and I hope the viewers enjoy it."

Sandeep Pandit said: "India! A land of myriad colours, cultures and cuisines. From the Himalayas in the north, rich river-fed lands, arid deserts, or the vast seas and the ocean that adorns the peninsular region, India has a rich and vivid culinary map as a nation of over a billion food loving people. Join me and my friends on SBS Food, as we present India Unplated! A compilation of known and not so known gems of Indian cooking, from different regions of India. I am excited to share these food recipes and stories, and I'm privileged that I'm able to showcase the Indian cuisine, in all its ancient and modern glory!"

SBS Food Commissioning Editor, Susie Jones, said: "We're thrilled to launch this debut food series India Unplated next month. India Unplated will provide viewers with a masterclass in the melting pot of spice, flavour and texture that is Indian cuisine. The series will reveal the splendour and rich history of Indian cuisine through the wealth of knowledge and full-flavoured recipes the hosts bring to the series. We can't wait for audiences to experience it."

India Unplated is a Chef's Ink and HSquared production for SBS.

India Unplated premieres Thursday, 23 September at 8.00pm on SBS Food. The series will also be available after broadcast on SBS On Demand.