Glitoris have earned a reputation as one of Australia's most fearlessly political, uncompromising and unforgettable live acts. After extensively played and widely received singles, 'Trump Card', 'Spit Hood' and 'The Policy', Glitoris were crowned 'Queens of Australian Punk' (The Brag) and the band have wasted no time in following up with their brutal, unapologetic hard rock anthem 'Slut Power' (out Friday 14th February): a raging call-to-arms dealing with the insidious nature of violence against women.

Straight off the back of winning the National Live Music Award (NLMA's) for 'Hard Rock Live Act of the Year' (2019), 2020 sees Glitoris embark on their biggest national tour to date, starting in Alice Springs (6th March), a special International Women's Day performance in Darwin (7th March) and finishing up in their home town of Canberra (23rd May). Bringing a brand new show to the stage, complete with a powerful new image and a rallying protest befitting our times, fans can expect the band to be at their rousing, political yet satirical best.

Glitoris is Keven 007 (vocals and guitar), Andrew (Lead guitar and vocals), Malcolm (Bass and vocals) and Scott (Drums). Highly energetic, deeply political, satirical and sometimes absurd, Glitoris blends frenetic punk rock, classic hard rock riffs, metal prowess, pop harmonies and a dash of theatre with badass attitude and indelible songwriting, resulting in a unique, powerful and unrelenting musical force. Widely recognised as 'One of the fiercest live forces in the country' (Pile Rats), Glitoris has built an army of fans – The Gliterati - all over the country, toured extensively and performed at major national and international festivals including Groovin' The Moo, The New Zealand Fringe Festival, Triple R Kyneton Festival and Blackwoodstock Festival (New Caledonia). Glitoris has performed as much with brand new acts as they have with established punk royalty, including Frenzal Rhomb, Regurgitator, Shonen Knife and The Meanies.

The diverse, politically on-point and refreshing nature of Glitoris' sound means they are equally at home touring and performing as headliners or major supports, at festivals or sharing bills with new pop/rock/indie acts. Join Glitoris in 2020 for what promises to be their fiercest single and tour yet.

Question: Can you tell us about your latest single?

Glitoris: It's called 'Slut Power', it's the fourth and final single to be taken from our debut album The Policy. We've just released the video for it and we're about to head out on a national tour to spread the word!


Question: What message do you hope Slut Power spreads?

Glitoris: One of empowerment. We wrote the song with the aim of connecting with women and non-men. It's a song that says to them: 'We hear you. We know. We get it. We're with you. You didn't imagine this stuff. We stand in solidarity.' 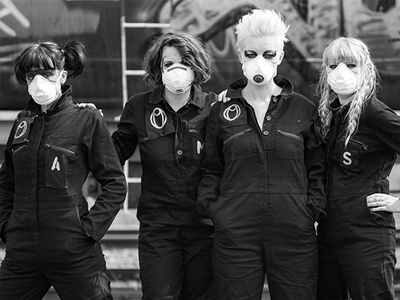 Glitoris: Live performance is everything to us. We work hard on our stage show and a huge amount goes into it in terms of the songs and set list, rehearsing vocals, the choreography and how we use the stage. In saying that, we're looking ahead and we can't wait to record the next album!

Glitoris: Slut Power. It's the one that connects with the audience the most and the one we get the most response to. We always get a great reaction to that song live and we feed off it. It's a hectic song to perform live. It's often a bit more up-tempo than on the recording and it's Andrew's chance to spit some venom.

Glitoris: A new show. New costumes. Protest. Humour. Politics. Loud music. Banter – and to leave one of our shows having had a great night out.

Glitoris: Glitoris is a portmanteau from the two words Glitter and Clitoris.

Glitoris: It was magic. Witches were involved. There were spells and stuff.

Glitoris: We only wanted to play music. That's still our number one motivation – to write, record and perform. All we care about is our music, the audiences at our shows and anyone who listens to our music and feels better for it. We also care deeply about using our platform to highlight political issues and making our presence and what we do meaningful. Anything else that happens industry-wise is a very nice bonus, but it's not what drives us.

Glitoris: Citizen Kay; we also want to work with an orchestra later down the line.

Glitoris: No, we are motivated and musically ambitious and there is a huge amount of love and camaraderie in Glitoris. Writing and playing music is therapy and touring is like holidays to us. Also, the band and its aesthetic and message is now much bigger than us as individuals and we're all acutely aware of that. We can't wait to tour and then continue work on our next record!

Glitoris: Not wanting to partake in the capitalist music industry but having to if we want to tour and reach our audience across the country.

Glitoris: On tour, it'll be getting up early and making sure we have everything packed. We'll meet up or share a car to the airport. It takes a while to check in all the guitars and pedal cases and stuff. We fly to a city and then either get a car or hire one and drive to wherever we're staying. We always stay together, most of the time at a hostel and we share a big room. Then we might head out to do something on radio. Gin is also a priority. We'll head to the venue around 4pm or 5pm and sound check, meet and hang out with other bands and then go out to eat. After that, it's all about preparation. We'll warm up on our instruments and particularly vocals. We might go through some specific parts of songs, particularly if we thought something wasn't 100% in rehearsal or at last night's show. Then we'll get changed and make up and it's show time. After the show, we hang out with other bands and our fans, listen to their experiences. We pack up the gear and then head back to wherever we're staying. There's usually a long debrief over some G&T's. If we're driving to Sydney or Melbourne, we often listen to podcasts and plan world domination in Keven's ute: MJ Uterus.

Glitoris: Having a vehicle and outlet to channel our political views and emotions and to spread a positive message. We love performing and we love The Gliterati.