Australians are leading the way in switching to natural sweeteners, with Australian and New Zealand markets outpacing the global marketplace in new products with stevia. ANZ as a combined market has experienced a 70%, five year growth of new product launches with stevia across food and beverages – 54% for food, 84% for beverages – according to Mintel research.

Dr. Priscilla Samuel, Director of the Global Stevia Institute, comments: 'As a naturally sourced, zero calorie sweetener, consumer interest in stevia has grown significantly since it was approved for use. Australian consumers are recognised as early adopters of health foods and natural ingredients and the growth of products using stevia as a core ingredient in the last five years is testament to this."

'Stevia was approved as an ingredient locally in 2008 and, since that time, Australia has consistently been one of the top 10 countries in terms of product launches incorporating stevia. This is particularly true for the beverage category with carbonated soft drinks being one of the top categories to innovate with stevia in the Australian market."

Australians are not alone in recognising the benefits of stevia as an alternative to sugar and artificial sweeteners – with the rate of new products sweetened with stevia growing by 58% globally between 2009 and 2012.

The following year witnessed 12 months of substantial market growth with products containing stevia as a core ingredient, with the number of launches increasing 3.5 fold across all major food and beverage categories. This brought the total number of new products with stevia in Australia to 58 in 2013, dropping slightly to 56 in 2014.

Dr Hazel MacTavish-West, Food Scientist and Technologist, a specialisist in the flavour, colour and health benefits of plant-derived extracts as food ingredients comments: 'Stevia is over 200 times sweeter than sugar, so a little goes a long way in terms of ingredient use. Being a 'zero-calorie", natural sweetener, stevia is an ideal alternative for those who are looking to manage their calorie and carbohydrate intake.

'In the last five years, significant advancements have been made in terms of the extraction and taste of stevia, and as a result we have seen an increasing number of products incorporating this ingredient in the Australian market."

PureCircle is the world's leading producer of high-purity stevia ingredients for the global food and beverage industry. The company is a driving force behind moving stevia from a niche ingredient to mainstream, global acceptance, and is changing the conversation around sweet. Its mission is to encourage healthier diets around the world through the supply of natural ingredients to the global food and beverage industry. Its vision is to lead the global expansion of stevia as the next mass volume, natural-origin sweetener. PureCircle has offices around the world with the global headquarters in Kuala Lumpur, Malaysia. PureCircle's shares are traded on the LSE AIM index. For more information, visit: www.purecircle.com.

Hazel is a plant scientist (phytochemist) with over 25 years' experience working on plant crops being grown for extractives for the food, pharmaceutical and personal care industries, globally. Hazel specialises in communicating the unique attributes of plant-derived products and foods, whether it's the health benefits of carrot, the flavour of blackcurrants, or the unique properties of stevia.

As a creative scientist and entrepreneur, Hazel provides a unique and diverse near-market approach, working with blue chip and smaller companies to identify new ingredients, new products and to develop supply chains for them.
Hazel is passionate about marketing fruit and vegetable products to consumers on the basis of taste and health, and a wealth of industry contacts to make this happen.
New product development is a key interest.
Hazel has been involved in postharvest horticultural research for nearly 25 years, and an independent horticultural consultant since 2003.


Question: What is Stevia?

Dr Hazel MacTavish-West: Stevia is a herb, native to South/Central America. The scientific name of the species known globally as -stevia' is Stevia rebaudiana, and it's in the daisy (Asteraceae) family – the same family as chamomile and sunflowers. The leaves of stevia naturally have an intense, sweet taste, with other flavour notes, also.


Question: Can you talk us through the unique properties of stevia?

Dr Hazel MacTavish-West: Like many plants, stevia has unique, natural chemistry. In the case of stevia, it's the presence of -steviosides' which are the sweet tasting components. Steviosides are compounds with a central core known as -steviol', with 3 or 4 glucose groups attached to the outside. Stevia plants contain almost a dozen different types of steviosides; the one with 4 glucose units, called Rebaudioside A (-Reb A') is the main one used as it has the best flavour. Reb A is 200-300 times sweeter than sucrose, and also has some bitter and liquorice flavours. Steviosides are water-soluble.


Question: Why is Stevia better than sugar?

Dr Hazel MacTavish-West: Stevia is a natural alternative to sugar (which is also natural, obviously) for some food products and in cooking; most people tend to reduce the amount of sugar used, replacing some of it with stevia. Sugar adds a certain -mouthfeel' and has some different cooking properties to stevia, meaning that both have their place. For example, you can't caramelise stevia. The main reason to use stevia instead of sucrose, is to reduce the calorie and carbohydrate content of foods.


Question: How can a product have zero calories?

Dr Hazel MacTavish-West: Steviosides, the natural compounds in stevia which contribute a sweet taste, have 4 glucose units attached to a -backbone' of steviol. The whole compound passes through our gastrointestinal (GI) tract intact until it gets to our lower intestine, or colon. There the natural gut biota (bacteria) take off the glucose units and ferment them. We do not absorb the glucose at this stage of our intestine, as the large intestine is where our bodies re-absorb water only. The steviol backbone of the stevioside is transported to the liver, modified and then excreted in our urine. Thus no calories, or carbohydrates. In contrast, the glucose and fructose in sugar are available immediately – in our mouths, and in our small intestines – which is the part of the GI tract where we absorb all the nutrients from the food we eat.

Dr Hazel MacTavish-West: Stevia is used in confectionary, especially chocolate, cordials and soft drinks, bakery and other ready to eat products. You can also buy bags of stevia for use at home from many retail outlets, in cooking and in hot drinks etc. Stevia is stable to acidity and heat.


Question: How can we use Stevia in cooking?

Dr Hazel MacTavish-West: Stevia powder – which is a purified extract blended with a few other ingredients – can be used to replace sugar in things like salad dressings, marinades, sauces, baking, and hot drinks. Use much less stevia than you would sugar, as stevia is considerably sweeter than sugar – you will need to taste things and experiment to get the quantities just right. Sugar is a better choice for caramels and toffee (where the change in texture, flavour and colour with heat is required).


Question: Can you talk about how Stevia affects our teeth?

Dr Hazel MacTavish-West: The glucose units in the steviosides in stevia are not available to our bodies until they are in the lower intestine, where they are released by gut bacteria but are not absorbed by us. Thus there is no reason to suggest that stevia has any impact at all on teeth and dental caries, unlike the simpler sugars: glucose, fructose and sucrose.


Question: What is Stevia a substitute for?

Dr Hazel MacTavish-West: Stevia is a substitute for sucrose (table sugar), also other forms of sweetening like honey, maple syrup, golden syrup, agave etc. All of these forms of sweetening are -simple sugars' – combinations of glucose and fructose – which contain carbohydrates and calories (-energy') and may have an impact on dental health, obesity and diabetes. Where a sweetener is being used for an effect like caramelisation or to produce a solid product like toffee – stevia is not suitable as it doesn't work like that.


Question: How long has Stevia been available in Australia?

Dr Hazel MacTavish-West: High purity stevia extracts (which contain 95% purity steviol glycosides) were approved as safe foods in Australia and New Zealand by FSANZ (Food Standards Australian & New Zealand) in 2008, as they have in many other countries. The food additive number for steviol glycosides is 960. More and more products containing stevia have emerged in recent years.

Start preparing your masterstock by placing water, soy, ginger, dry shrimp in a large saucepan and bring to the boil.
Place your speck into a deep roasting dish, cover with the masterstock and then place into a moderate oven for about 1 hour or until the speck is soft (when tested with a knife).
Remove from the oven and serve straight away or cool in the liquid.

Crushed Peas:
To make the crushed peas, boil in well-salted water until the peas are tender, remove, and while still hot mash with butter, salt and pepper. Place to one side and keep warm while you poach your eggs and portion your speck.

Plating Instructions:
Arrange a piece of speck onto each plate, then place next to it a dollop of peas. Top with 2 poached eggs and then sprinkle over crumbs. 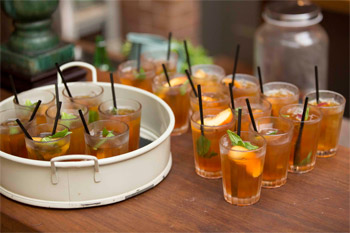 Method
Cut peach in half, and on a very hot char grill pan or plate, grill the cut side of the peach until well coloured. Set aside and allow to cool completely.
In a large jug, combine the mint, tea and cold water, then add the peaches and allow to sit overnight.
Just before serving, taste and adjust the sweetness with stevia. 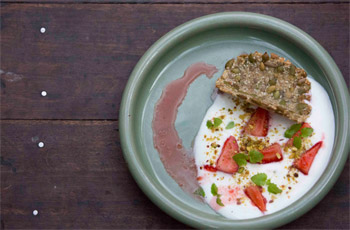 Place the rolled oats into a food processor and grind until a fine powder. Then in a bowl, combine with stevia.
Make a well in the center of the oats and add coconut oil, lightly beaten egg whites
and the vanilla bean. Mix everything together really well.
Add pepitas, sesame seeds and sunflower seeds, and mix again. Leave the mixture to rest for at least 30 mins.
On a heavy cookie tray, place down a non-stick sheet or grease-proof paper that has been lightly oiled.
Place small teaspoon-size dollops of the tuile mix about 3-4cm apart, then cook in a
pre-heated 180° oven for about 13 mins, or until they are golden and crisp.
Let the tuile cool for about 10 mins before removing from the tray.
Finish cooling on a wire rack.

Note: You may have to cook this mixture in batches.