The -Tried-It-All' hay fever campaign (promoted via the website http://hayfeverhelp.com.au/) is launching today with Dr Ginni Mansberg as ambassador. The campaign reminds hay fever sufferers who feel they have -tried-it-all' to consider visiting their doctor for advice. The campaign website features a humorous educational animation sharing the story of -Tried-It-All' patients, general hay fever information and information about the role a GP can play. It also features a blog by Dr Ginni Mansberg.

According to Dr Mansberg, GPs can be a forgotten, yet important, resource in the battle to manage hay fever symptoms.

'Some people struggle terribly to manage their hay fever symptoms. Those who suffer in spring may go through the whole season without finding relief. Others battle their triggers all year round," Dr Mansberg says. 'Many don't realise a doctor can help."

'There is a misconception that hay fever is a minor condition and not something to visit the doctor about. When people believe they've exhausted other options and are still suffering, a doctor can really help. A doctor knows your medical history, will only recommend treatments that are evidence-based and can help people get on top of their condition," said Dr Mansberg.

The research shows that the most common reason hay fever sufferers give for not visiting their doctor is, 'I don't think hay fever is a condition that justifies a visit to the doctor" (159 respondents). Gen Y (21 – 35 year olds) most commonly responded 'I don't have time" (21%).

Other findings of the research include:
One in five (22%) people (out of 776 respondents) with hay fever say they have been forced to take a day off work due to being unable to get their hay fever symptoms under control.
Two in three (68%) respondents suffer from hay fever mainly in spring.
One in four (25%) Australian hay fever sufferers say their annual expenses are increased by at least $100 due to hay fever.

If you have any questions about your hay fever symptoms, speak to your doctor or visit http://www.hayfeverhelp.com.au/. 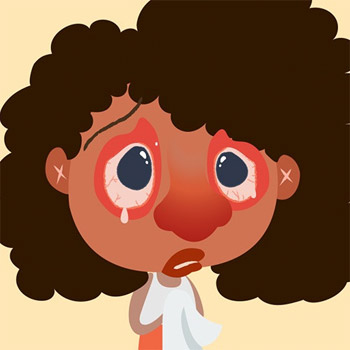 Question: What is hay fever?

Dr Ginni Mansberg: It's allergies to common things like dust, pollen, animal hair or even mould. If you're allergic to these things and your body comes into contact with them on your hands or in the air, it mounts a vicious revolt giving you runny itchy and blocked nose, itchy runny eyes, and feeling tired.


Question: What are the symptoms associated with hay fever?

Dr Ginni Mansberg: As it affects the nose and eyes primarily both of these things itch and run! Think sneezing, itchy, runny and or blocked nose, watery red itchy eyes.


Question: When do most Australians suffer these hay fever related symptoms?

Dr Ginni Mansberg: It tends to be worst in spring especially if pollen or grass is your nemesis, but any time of the year can affect you if you're allergic to animal hair or pollens.


Question: Why do you believe almost half of Australians with hay fever, have never spoke to their GP about their condition?

Dr Ginni Mansberg: Lots of reasons. They are too busy to get to the doctor, and they just think there's nothing that can be done. Hay fever is one of those things people just put up with. What a shame because hay fever is a nightmare and there's so much we GPs can do to help!


Question: Why should Australians make time to visit their GP about hay fever?

Dr Ginni Mansberg: Because hay fever sucks and we can help you manage those awful symptoms.


Question: What treatment options do our local GPs have for those suffering from hay fever?

Dr Ginni Mansberg: We can diagnose the exact cause- which might not be obvious to you. We can also give you access to prescription medicines that work well as well as a referral to an allergist for specific allergy desensitization. We can also help you navigate the minefield of over the counter medicines.


Question: Why did you choose to become an ambassador for the -Tried-It-All' hay fever campaign?

Dr Ginni Mansberg: I'm a GP and I'm a hay fever sufferer (well with a fifth of Aussies suffering hay fever I'm not so special!) and I feel so sorry for anyone who thinks they have a permanent cold when in fact they just have nasty allergies.


Question: What advice do you have for Australians with hay fever?

Dr Ginni Mansberg: Don't just put up with it. Get it sorted- and let your GP put you onto treatments that Really work!

It is a little known fact that humans produce two types of sweat: thermal, or 'physical' sweat and emotional, or...