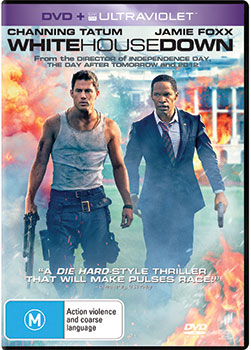 Thanks to Universal Sony here is your chance to win one of 10 x White House Down on DVD.

Two of Hollywood's most sought-after actors, CHANNING TATUM (21 Jump Street, Magic Mike) and Academy Award® winner JAMIE FOXX (Best Actor, Ray, 2005), team up in this explosive action thriller about a capitol policeman trying to protect the U.S. President during a hostile takeover of the White House.

Capitol policeman, John Cale (Tatum) has just been denied his dream job with the Secret Service of protecting President James Sawyer (Foxx). Not wanting to let his little girl down with the news, he takes her on a tour of the White House. When the complex is overtaken by a heavily armed parliamentary group, and with the nation's government falling into chaos and time running out, it's up to Cale to save the president, his daughter, and their country.

White House Down is available to own on Blu-ray™, DVD and UltraViolet™ from 2 January, 2014.