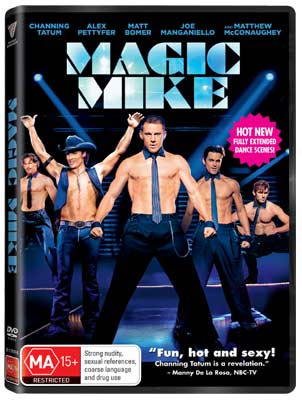 Thanks to Roadshow Entertainment here is your chance to win one of 10 x Magic Mike on DVD.

Seasoned performer, Magic Mike (CHANNING TATUM - 21 Jump Street) has what every red-blooded guy wants a ripped bod, sexy girls, hot parties and loads of cash. Now hes about to take on an inexperienced young protégé (ALEX PETTYFYER - Beastly) teaching him the ropes on how to be the best.

As Mike keeps the magic flowing in the clubs, he has to fight for the one girl he really cares for. But will he have to choose between his fantasy world and his dream relationship?

Directed by STEVEN SODERBERGH (Oceans Franchise) and also starring MATTHEW McCONAUGHEY (Killer Joe), CODY HORN (End of Watch), JOE MANGANIELLO (What To Expect When Youre Expecting), MATT BOMER (In Time) and OLIVIA MUNN (I Dont Know How She Does It), this scorching film is loosely based on Channing Tatums real-life before he made it in Hollywood where he was a 19 year old stripper who worked all day… and worked it all night.