Yvonne De Carlo (born Margaret Yvonne Middleton; September 1, 1922 – January 8, 2007) was a Canadian-American actress, dancer, and singer. A brunette with blue-gray eyes, she became an internationally famous Hollywood film star in the 1940s and 1950s, made several recordings, and later acted on television and stage.

Born in Vancouver, British Columbia, De Carlo was raised in the home of her Presbyterian maternal grandparents. Her mother enrolled her in a local dance school when she was three. By the early 1940s, she and her mother had moved to Los Angeles, where De Carlo participated in beauty contests and worked as a dancer in nightclubs. In 1942, she signed a three-year contract with Paramount Pictures, where she was given uncredited bit parts in important films and was intended to replace Dorothy Lamour. Paramount loaned her out to Republic Pictures for her first credited role in a feature film, Wah-Tah in the independent production Deerslayer (1943).

She obtained her breakthrough role in Salome, Where She Danced (1945), a Universal Pictures release produced by Walter Wanger, who described her as "the most beautiful girl in the world." The film's publicity and success turned her into a star, and she signed a five-year contract with Universal. From then on, Universal starred her in its lavish Technicolor productions, such as Frontier Gal (1945), Song of Scheherazade (1947), and Slave Girl (1947). Cameramen voted her "Queen of Technicolor" three years in a row. Tired of being typecast as exotic women, her first serious dramatic performances were featured in two films noir, Brute Force (1947) and Criss Cross (1949).

The first American film star to visit Israel, De Carlo received further recognition as an actress for her work in the British comedies Hotel Sahara (1951) and The Captain's Paradise (1953). Her career reached its peak when eminent producer-director Cecil B. DeMille cast her as Moses' Midianite wife, Sephora, her most prominent role, in his biblical epic The Ten Commandments (1956), which was immensely successful at the box office and remains an annual tradition on television. Her success continued with starring roles in Flame of the Islands (1956), Death of a Scoundrel (1956), Band of Angels (1957), and The Sword and the Cross (1958), in which she portrayed Mary Magdalene. She also accepted supporting roles in McLintock! (1963) and A Global Affair (1964).

She gained a new generation of fans as a star of the CBS sitcom The Munsters (1964–1966), playing Herman Munster's glamorous vampire wife, Lily, a role she reprised in the feature film Munster, Go Home! (1966) and the television film The Munsters' Revenge (1981). In 1971, she played Carlotta Campion and introduced the popular song "I'm Still Here" in the Broadway production of the Stephen Sondheim musical Follies. Yvonne, her best-selling autobiography, was published in 1987. A stroke survivor, De Carlo died of heart failure in 2007. She was awarded two stars on the Hollywood Walk of Fame for her contributions to motion pictures and television. 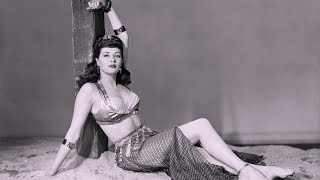 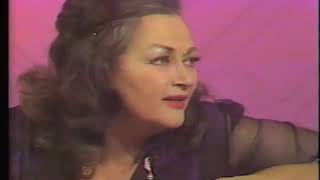