David Ferrer Ern (Valencian pronunciation: [daˈvit feˈreɾ ˈɛɾn]; Spanish: [daˈβið feˈreɾ ˈɛɾn]; born 2 April 1982) is a Spanish professional tennis player who is currently ranked world No. 33 in men's singles by the Association of Tennis Professionals (ATP). A three-time Davis Cup champion with Spain, Ferrer has won tournaments at all levels (ATP 250, ATP 500, Masters 1000) except at a Grand Slam, and currently has the eighth highest career prize money earnings of all time. Ferrer also holds the distinction of winning the most matches on the ATP tour without having won a Grand Slam tournament, passing Brian Gottfried who held this record for 32 years.

David Ferrer turned professional in 2000 and was in the first years of his career known as a clay-court specialist, having won half of his titles on the surface. However, he has had significant success on all surfaces, having reached the final of the French Open in 2013 (without losing a set), the semifinals of the Australian and US Opens twice each, and the quarterfinals of Wimbledon twice. He was part of the Spain Davis Cup team that won the finals in 2008, 2009, and 2011. He won the Paris Masters in 2012, and he was runner-up at six Masters tournaments as well as the Tennis Masters Cup in 2007. He is widely considered one of the best players not to have won a Grand Slam tournament. He first achieved a top-10 ranking in 2006 and reached a career-high ranking of world No. 3 in July 2013. 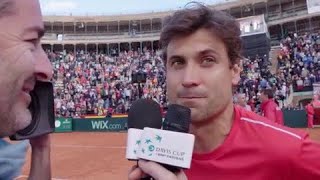