Claudette Colbert (born Émilie Claudette Chauchoin; September 13, 1903 – July 30, 1996) was an American stage and film actress and a leading lady in Hollywood for over two decades, and has been called "The mixture of inimitable beauty, sophistication, wit, and vivacity".

Colbert began her career in Broadway productions during the late 1920s and progressed to motion pictures with the advent of sound film. Initially associated with Paramount Pictures, she gradually shifted to working as a freelance actress. She won the Academy Award for Best Actress in It Happened One Night (1934), and received two other Academy Award nominations. Other notable films include Cleopatra (1934) and The Palm Beach Story (1942).

With her round face, big eyes, charming, aristocratic manner, and flair for light comedy as well as emotional drama, Colbert was known for a versatility that led to her becoming one of the best-paid stars of the 1930s and 1940s. During her career, Colbert starred in more than sixty movies. She was the industry's highest-paid star in 1938 and 1942. Among her frequent co-stars were Fred MacMurray in seven films (1935−49), and Fredric March in four films (1930−33).

By the early 1950s, Colbert had basically retired from the screen in favor of television and stage work, and she earned a Tony Award nomination for The Marriage-Go-Round in 1959. Her career tapered off during the early 1960s, but in the late 1970s she experienced a career resurgence in theater, earning a Sarah Siddons Award for her Chicago theater work in 1980. For her television work in The Two Mrs. Grenvilles (1987) she won a Golden Globe Award and received an Emmy Award nomination. 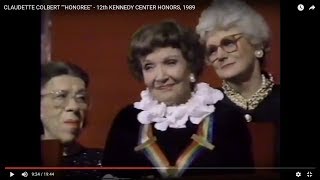