Cassandra Rae "Cassie" Steele (born December 2, 1989) is a Canadian actress, singer and songwriter, best known for portraying Manny Santos on Degrassi: The Next Generation and Abby Vargas on The L.A. Complex. Steele is of British descent on her father's side and Filipino descent on her mother's side. In 2014, she played Sarah in the MTV horror television movie The Dorm. 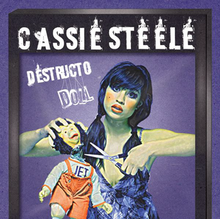 Destructo Doll is Canadian actress and singer-songwriter Cassie Steele's second studio album. It was released on July 21, 2009. Steele co-wrote or wrote all of the songs on Destructo Doll. It was announced on Cassie Steele's official fan website that "Go Dark" would be the second official single from the album.

How Much For Happy

How Much For Happy Tracks