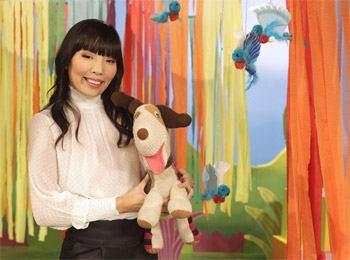 This year, iconic Australian television program Play School celebrates 50 years on air as the nation's most respected, trusted and longest-running children's series. To mark this special occasion, from 4 July ABC KIDS (TV and iview) presents an exciting series of Play School Celebrity Covers that is sure to entertain both young and old alike.

The series of mini episodes features a star-studded line up of popular Australian personalities turning their hand at being a Play School presenter, either performing a song or reading a story. From 4 July, episodes will air daily on ABC KIDS at 8am and 5pm. On the program's official birthday on 18 July, a half hour collection of a number of the mini episodes, Play School Celebrity Covers Special, will air on ABC KIDS at 630pm.

The Play School Celebrity Covers series will also be available on ABC iview, with five episodes debuting on 4 July and further episodes being added to the platform daily following their broadcast on ABC KIDS.

9 July: 8am Annabel Crabb and Leigh Sales, Singing in the Kitchen; 5pm Kate Cebrano & daughter Gypsy, I like Peace, I like Quiet

10 July: 8am Costa Georgiadis, Worm at the Bottom of my Garden & Wiggerly Woo; 5pm Caitlin Cooper, Ellie Carpenter and Michelle Heyman from the Matildas, If You're Happy and You Know It

From 5 July: Episodes airing on ABC KIDS will be available following its broadcast on ABC iview

Join the conversation on #PlaySchool50