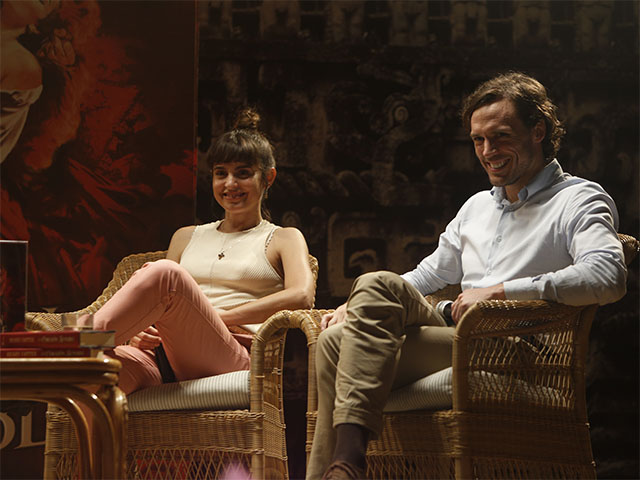 Henry Copper"young, English and about as relaxed as a stiff collar"is a novelist. He's written one book"The Sensible Heart"which was described by reviewers as "like watching dryness dry." The Sensible Heart wasn't a best-seller and Henry is resigned to its obscure fate.

So when his agent Jen calls Henry in to tell him that his novel is suddenly a huge hit, Henry is shocked. He's even more shocked when Jen tells him it's a huge hit in, of all places, Mexico. Jen goes on to tell Henry that he needs to fly out there and plug the novel, in person and on social media. Henry barely has a phone let alone a Twitter account.

Henry reluctantly goes to Mexico where he discovers that his translator is not a distinguished old gentleman, but a young and impatient woman called María. María doesn't want to be there either, driving Henry around (along with her grandfather Max and young son Diego) but she needs the work (the father of her son, Antonio, is on the road and not providing for his family).

The reason María would rather be anywhere else than on tour with Henry soon becomes apparent. At a book event crammed with Henry's adoring, mostly female fans, María is very reluctant to read out any of the passages from Henry's book. Under pressure, she does so"and Henry learns to his shock and horror and outrage that María has completely changed his book. Not only that, she has sexed it up"with pages of nudity, steamy lust and sex of all varieties.

Henry goes ballistic, but María fights her corner. His book was boring! It was sexless! It was only good for getting people to go sleep! The two of them fight and bicker until Henry's Mexican publisher Pedro turns up and tells them that the only way anyone is going to make any money from this book is to shut up and smile, grin and bear it and pretend everyone is literally on the same page.

One night, María sees Antonio in town"when he's supposed to be back home. She is enraged at his attitude. Henry sees this and says nothing... but could it be that he's jealous of this stranger?

As the tour continues, Henry and María get to know each other. One day, when their car has broken down, María tells Henry she's not living the pleasant life of a translator at all, but instead works menial jobs to support the burden of Diego and Max"and she upsets Diego when he overhears her. Henry reveals his human side when he goes to find Diego and, using his terrible Spanish, accidentally makes him laugh.

The tour ends with more fans gathering in the beautiful jungle setting of Palenque for the final event. It is a huge success, and Antonio watches it on TV. Now it's his turn to be jealous of the handsome Englishman who can make María smile.

Henry and María enjoy a last walk and Henry maybe has too much to drink. He tells María about his slightly sad life and maybe lies about some penguins. María and Henry share a warm moment together and it's clear there is a spark between them.

Henry is all set to leave. María won't say goodbye because she hates farewells. And then, as Henry waits for his delayed flight, a change of plan. The publishers need a sequel to Henry's book. But seeing as María sort of wrote it... Jen and Pedro each work on Henry and María to get them to collaborate on a second book.

And they have less than two months to write it.

María and Henry work together again, this time in person. They work well, they are close, but María has only one condition"Henry never works on the book without her. Soon the book is nearly done. Pedro appears dressed as a Roman Emperor"it's the last night of Carnival! María drags Henry out and they have a wild time, dancing and laughing. Even the presence of Antonio and his snide remarks to María can't spoil it.

And that night María and Henry make love...

The next day, Henry sits down, inspired by his new feelings for María, to write. Pedro warns him but he's sure it'll be OK. Then a text to Henry arrives showing María in bed with Antonio. She was actually sleeping on her own and he tricked the shot, but Henry doesn't know, and just assumes the worst.

Henry and María fight. He doesn't trust her and now she can't trust him. She throws him out. Henry goes back to England. María's life of drudgery resumes.

And then Diego comes to María and drags her to a venue where Henry is not only launching the book they wrote together but also crediting María for the work, and for "rewriting" him. He says he is sorry. Antonio appears, ready for a fight and Henry somehow knocks him out. Henry and María look into each other's eyes. Using his limited Spanish, Henry tells María he loves her. To the delight of the fans, Henry and
María kiss. Love has triumphed.

SAM CLAFLIN
Two Hearts Q&A event:
"So, I play the character Henry Copper, who, I wouldn't say is a failed writer, but I wouldn't say he is a good writer, and where we find him in this scene is his 2nd attempt at a book after his first success. This is where the magic happens, this is me confessing my undying love for her but also her ex-husband is hoping to win her back."

On the dancing in the Carnival scene:
"The worst thing about shooting this scene is the dancing," he laughed. "I had hoped to never have to
do that ever again, I wasn't sure that was happening today but there is full on choreography... I thought it was a joke, but we are basically now a musical."

VERÓNICA ECHEGUI
On María's character:
"The first time I read the script, I bonded with María right away, her emotional journey in the story, and her background. There are things we both have in common, and I think she was written with care and
respect"and there's a real understanding of how she feels trapped in the life she's created, and how
she's had to put her dream of becoming a great writer to one side."

On the Comedy:
"The complexity and comedy in María and Henry's impossible relationship"the process they go through to realize they are madly in love"leads to bizarre and hilarious situations. Book Of Love has a very particular Mexican identity that makes it different to other romcoms. It gives the movie a personality and makes it even more hilarious!"

On the Script:
"It's such a well written script, a gift for an actor, and of course the cast was a definite reason for me to
join the project."