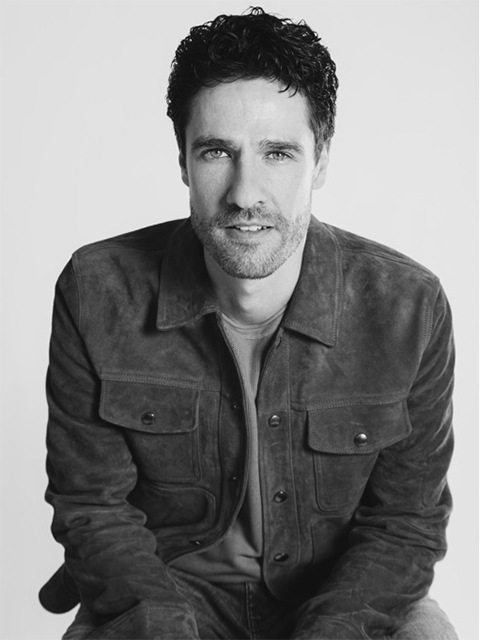 Handsome, multi-talented actor Ben Mehl ("The Good Wife") is starring in his first series regular role opposite Penn Badgley in Netflix's popular series "You" which returns for its highly-anticipated 3rd season. Developed by Sera Gamble and Greg Berlanti, You is based on Caroline Kepnes' bestselling books You and Hidden Bodies. In the third season, Joe and Love are married and raising their newborn son, Henry, in the Californian suburb of Madre Linda. As their relationship dynamic takes a new turn, Joe continues to repeat the cycle of obsession with a burgeoning interest in Natalie, the next-door neighbor. This time, Love will flip the script to ensure that her dream of having the perfect family will not be torn away so easily by Joe's compulsive actions. Mehl plays the role of 'Dante,' a confident, independent, but fallible human being who has found extraordinary ways to adapt and continues to be a librarian even after losing his sight. A veteran whose eyesight was damaged, Dante is a dedicated family man with a husband and two stepchildren who longs to expand his family, and delights in helping his friends with their children. Season 3 of YOU premieres on October 15th, 2021 on Netflix.
Netflix's YOU Season 3 Trailer
Although Mehl plays a blind character, Mehl is not totally blind, he is legally blind. He was diagnosed with a rare genetic form of macular degeneration called Stargardt's disease which causes one to lose their central vision. He was told the condition was progressive and there was no treatment or cure and eventually his vision deteriorated to the point where he could no longer read normal sized text or recognize faces. This led him to rethink his career, but he came out of this deciding to not let this disease define him but would try his absolute best to learn what it meant to be an actor.
In order to prepare for role as Dante, a blind character, Mehl trained with an orientation and mobility specialist to learn the proper techniques for using a white cane. At times, he felt like he was preparing for what his future may hold for him. He spent hours observing and taking notes outside a building for blind residents in New York and gained a deep appreciation for the skill it takes to navigate the world without sight. His character was inspired by Sera Gamble's godfather who was blind and created this character because she believed even those who are blind deserve to be represented. Recognizing his privilege within the community of not being completely blind, it was important for him to do his research and portray this character accurately.
Born and raised in Toronto, Ben loved to perform at a young age. As a 4th grader, a teacher heard Mehl singing the national anthem at school and recommended he audition for Claude Watson School for the Arts, a public school that required an audition to be admitted. It was there where he explored drama, music, dance, and was an active student joining the swim team, four different choirs, and school shows in addition to being passionate about science and space. He graduated from the University of Toronto where he double majored in Astrophysics and Drama. He proceeded to audition for acting schools and was accepted to NYU's Graduate Acting Program and Julliard and eventually choosing to attend NYU for his MFA. Mehl is best known for his work in "The Good Wife" and has much experience performing in regional theater in New York and Shakespeare in the Park. In addition to acting, Mehl is also teaching acting, voice and movement for actors in NYC. He has taught Movement and Shakespeare's Clowns at the NYU Graduate Acting Program, where he received his MFA and teaches Voice and Movement, Physical Characterization and Combat at the New York Film Academy and has also taught at The Public Theater, Red Bull Theater, the Refugee Youth Summer Academy, the New School and as a private coach. Fun fact: Mehl is an extremely talented beatboxer!