Behind The News Turns 50! The ABC's flagship children's news program, Behind The News (BTN), is celebrating its 50th anniversary on Tuesday June 5 and to mark this milestone ABC News will give our children a voice like never before.

All over the country, ABC News will be throwing open its doors for the day, offering regular Aussie kids the incredible opportunity to be part of the news. Fancy yourself as a meteorologist in the making? You can do that too! On June 5, kids from around the country will be given a voice in the way we report the news.

Each ABC metropolitan newsroom will host a BTN rookie reporter who will file a story relevant to children. That story will be featured on the ABC News website, and air during the state-based flagship 7pm News.

The kids' takeover doesn't end there. From guest spots on ABC Local Radio, to hosting a weather bulletin on ABC News Breakfast, or a full week of news bulletins on many of the ABC Radio Afternoons programs, all around the country - kids are running the show. 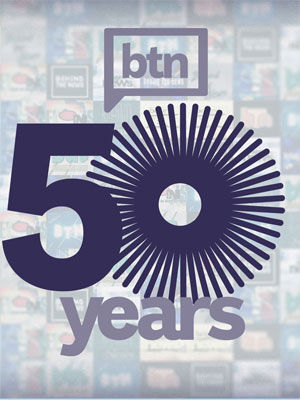 ABC ME will kick off the celebrations for its flagship news program when the BTN hosts join News To Me's Pip, Grace and Lawrence in a special News To Me episode airing on Sunday June 3 at 9am. On the anniversary, Tuesday 5 June, ABC ME will air an anniversary edition of BTN at 10am, a very special kids version of Q&A at 4.30pm, hosted by BTN's Amelia Moseley and featuring children on the panel and in the audience, and the very first episode of BTN will also screen at 7pm.

Families can stroll down memory lane together with a half-hour documentary looking back at the history of BTN to air on Tuesday 5 June at 6.00pm on ABC, followed by an encore of the Q&A special at 6.30pm.

For online audiences, there will be special features showcasing BTN's rich archive, as well as a series of short-form video features to mark the anniversary.

To round out the celebrations, BTN is hosting a party at ABC Adelaide, where local children, the BTN team and alumni, and other ABC luminaries will mark this milestone.

BTN's 50th anniversary programming airs on Sunday June 3 at 9am on ABC ME, and on Tuesday June 5 from 10am on ABC ME and from 6.00pm on ABC.