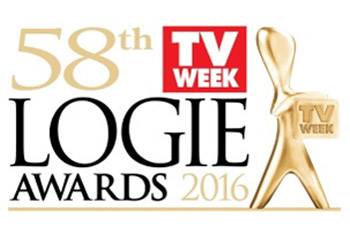 'It's very humbling," Waleed tells TV WEEK. 'There is a statement being made by the audience when that happens, and that's incredibly flattering. Because I never honestly thought of myself as really ever being in the conversation."

'It's a real surprise, because I've always kind of assumed Logies were for other people," Waleed says after also taking out the award for Best Presenter.

There will be excitement for The Project desk tomorrow night with two Gold Logie winners hosting the show. The team also took out Best News Panel or Current Affairs Program.

Channel Ten's The Living Room couldn't wipe the smiles off their faces after going back-to-back for Best Lifestyle Program.

'We always hope to win, but we never expect it and we're always very grateful," Dr Chris Brown says.

It wasn't just the Gold Logie that had the highest honour of the night. The crowd roared when A Place To Call Home actress and TV legend Noni Hazlehurst was inducted into the TV WEEK Logies Hall of Fame.

'I'm really proud to be recognised," Noni tells TV WEEK. 'But, there are many equally deserving women who should have been acknowledged before this. Hopefully, the glacier will keep moving forward."

Home And Away took out the award for Best Drama Program, beating out newcomer 800 Words as well as Love Child and A Place To Call Home.

As well as a one-year scholarship at Stella Adler Academy Of Acting And Theatre in LA, thanks to LA-based non-profit organisation Australians In Film and their exclusive partners. They'll also receive a one-year management contract in LA with Australian Artists Management, as well as a TV WEEK photo shoot.

And the winners are…

Most Outstanding Miniseries or Telemovie