Subscription television industry gathers at Sydney Theatre for the sold out 9th Annual ASTRA Awards. Hosted by Lee Furlong, Tara Moss and Helen Dalley, the glamorous event was a jewel in the crown for what has been an exceptional year for subscription TV. The entire night from the red carpet, through the 90 minute ceremony to the exclusive after party was a reflection of the breadth and depth of talent and content across the subscription TV platform. 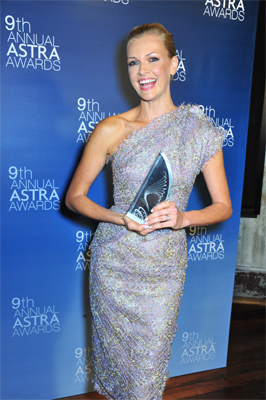 Guests on the night were entertained by musical performances from Jessica Mauboy, Katie Noonan's Elixir Trio and Guineafowl. A surprise unscheduled performance by Icehouse's Iva Davies, had him perform an acoustic rendition of his Australian classic Great Southern Land, which was met with rapturous applause. The musical talent continued at the exclusive after party where Channel [V]'s Danny Clayton and Jane Gazzo spun the decks and vocalist Cavan Te entertained the guests with some classic soul, old school funk, R&B and smooth jazz accompanied by a vocal trio and baby grand piano.

The prestigious Channel of the Year award went to The LifeStyle Channel for the second year.