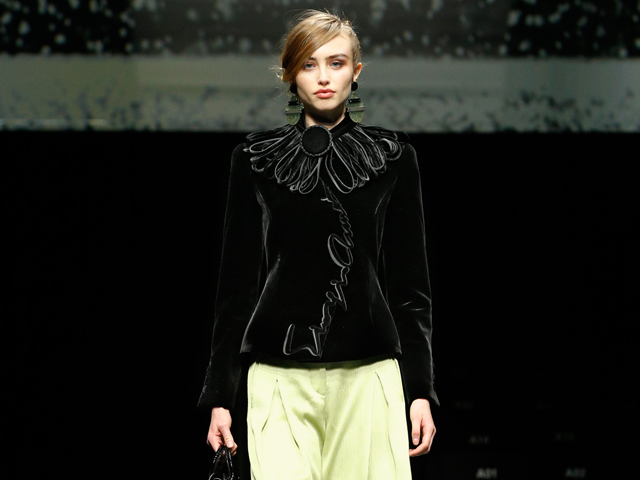 In Giorgio Armani's world, precision meets gentleness. Thus the purity of the lines that envelop the body and accompany its gestures also enhances the wearer's personality, in its most intimate and truest qualities. Masculine and feminine come together in a new balance, reaffirming the essence of a style that is coherent and constantly evolving.

This season, the dialogue between the men's and women's wardrobe takes place in an atmosphere drenched with subdued romanticism. Over the sound of the moving notes of classical music, a vision of velvety and trembling precision emerges. The epaulettes, chevrons, and ribbing of the uniforms of literary heroes, along with the enveloping coats, small jackets with high buttoning, and knickerbockers tucked into boots, are re-interpreted in a feminine key; soft, delicate. Camouflage turns into an abstract and sparkling composition of flowers and petals, while the uniform loses its martial rigour to suggest a more graceful demeanour.

Black velvet highlights movement, marking out the rhythm in fluid silhouettes with strong shoulders. Small jackets, greatcoats, straight-leg trousers, knitted overcoats, worn with flat shoes or boots and paired with geometrically-shaped bags, sketch out a progression that in the evening gives way to long, glittering dresses. Black dominates the scene: bright rather than nocturnal, punctuated by generous dashes of pink, teal, and pearl grey.

Giorgio Armani ended the show with a message of love for China – a country with which the designer has always maintained a special bond, both aesthetic and cultural – with a selection of looks from the Giorgio Armani Privé Spring/Summer 2009 and 2019 collections, which were specifically inspired by China.